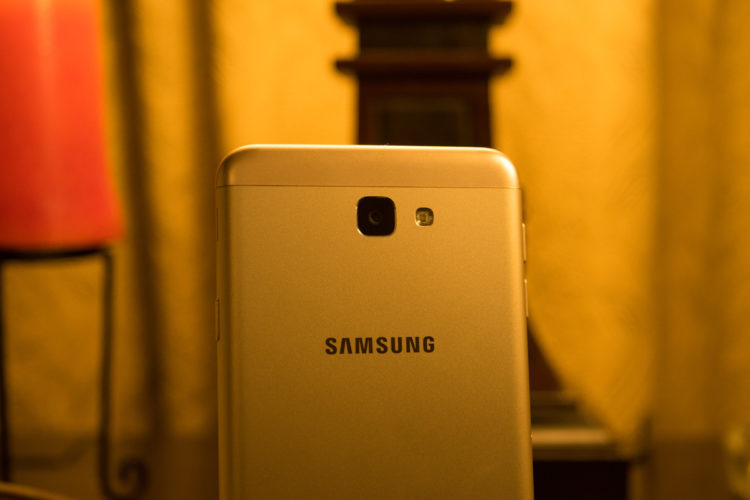 Samsung has surely changed its game in recent years by introducing metal and glass built phones with superior build quality. Unfortunately until last year, this was just restricted to flagships and the mid-range devices were deprived of this. However, times have changed very quickly and now it looks like even mid-range phones are getting the same treatment as their high-end siblings.

Today we take a look at one of the newest entrant in the market, the Samsung Galaxy J5 Prime. The phone is very much similar to the Galaxy J7 Prime, the one we reviewed just recently. Let’s get on with the review.

The J5 Prime sports the same metal build as the J7 Prime. The phone screams quality and premium. Also, being smaller in size, the body shows no signs of flexing so you don’t have to worry about accidentally bending the phone.

Up front you have the 5-inch display which is protected by Gorilla Glass and the glass is actually 2.5D, providing a smooth curve where the glass meets the metal. You have your standard array of sensors up top; an earpiece, LED notification light and the 5MP front facing camera. At the bottom of the display you have the home button with the fingerprint scanner, surrounded by the capacitive back and recent apps key.

At the back you have your 13MP primary camera with a single LED flash. Apart from that you only have Samsung and Duos branding and the regulatory information on the back.

For someone who is used to devices having screen sizes of 5.5-inch or above, the 5-inch screen on the J5 Prime felt small. The grip on a phone of this size is great and it ensures that the phone just won’t fall out of your hand. Typing, however, does prove a bit challenging.

All in all, the J5 Prime definitely raises the bar in terms of build quality and it definitely provides a challenge to its competitors.

The J5 Prime sports a 5-inch 720 x 1280 IPS LCD display which results in about 294ppi. Now, at a time when most phones come with Full HD displays, the HD display on the J5 Prime is a little bit of a disappointment. However, the screen size should also be taken into account. Sure, it may look bad on a 5.5-inch display, but on a 5-inch display I think 720p is more than sufficient enough to meet your expectations of a good display.

The colors are vivid and have good contrast. Outdoor visibility is also good and it gets just as bright as the J7 Prime. It also has the same “Outdoor Mode” which boosts the brightness even more for better visibility.

One of major areas where the J5 Prime differs from the J7 Prime is the performance. I’m sure you saw it coming too.

Moving on, in terms of general day usage, I’d say it gets the job done. During my time with the J5 Prime, it lagged only once. You definitely feel the exclusion of the 1GB of RAM when compared with the J7 Prime. Applications struggle to remain open in the background and reload most of the time. And to top it all off, you get around 400MB of free RAM even with the most basic apps open. Partly thanks to TouchWiz.

Games also take a hit. Graphic intensive titles such as the Asphalt 8 had a noticeably longer loading time and you could feel that the fps were falling pretty heavily most of the times. To sum it up, I’ll just say what AnTuTu says about the 3D performance of the J5 Prime. It is “mid-level”.

As a whole, the J5 Prime will be able to power through your day, but don’t expect much. Once again, I’ll use what AnTuTu says about the performance. It will “satisfy your daily use”.

And since I am talking about AnTuTu so much, I’ll attach the scores too so you can see how it compares with other phones.

“Well, since the price is lower than the J7 Prime, it doesn’t perform as good and also doesn’t have the same screen, then surely the camera is also worse?”

You’d be thinking that by now and I wouldn’t blame you. But, fortunately, that’s not the case in this department. The camera on the J5 Prime is exactly the same as the J7 Prime. The sensor, the pixel count, everything. And since the software is also the same, you can expect the same quality of pictures.

So, with the J5 Prime you get 4:3 images at resolution of 4128 x 3096. Pictures are impressive in daylight. Good contrast and color reproduction. However, it suffers from the same exposure problem as with the J7 Prime. It was on the higher side and I almost always had to turn it down before or after taking a photo.

The pictures on the J5 Prime are noticeably less sharper than its counterpart. They kind of have a soft touch to them and don’t have the sharpness or clarity of the its older sibling. They are not bad by any means and are perfectly usable on social media. You also have the ability to record full-HD videos.

Following are some sample shots:

There’s nothing “Prime” about the battery on the J5 Prime. Despite having the same thickness as the J5 (2016), it only features a 2,400mAh battery, down from the 3,100mAh found on the 2016 model. The reason as to why Samsung decided to cut down on the battery so much is unknown despite both of them having almost the same dimensions.

Moving on, the battery life on the J5 Prime is noticeably worse. With medium usage, which included some 4G usage, WhatsApp-ing, Facebook, taking photos, the phone was hardly able to last a day. I found myself reaching for either my charger or the power bank by 3-4 pm. The screen on time was around 4:30h to around 4:45h.

For the price, I would say the Galaxy J5 Prime is a solid performer. Specs are decent, has a fingerprint scanner, a 13MP primary camera, premium metal build. It would have been nice to see a 1080p screen though, seeing as some of its competitors are offering it at this price. Battery life could also have been improved.

At the end I would say that you get what you pay for. If you really, really want that extra screen size, the extra screen resolution, extra battery and that 1GB of extra RAM, then the J7 Prime is a better choice. But for most people the J5 Prime will more than suit their needs. It all comes down to your preferences.

You can get the Samsung Galaxy J5 Prime for a price of Rs. 26,000. Buyers also have the option to choose between the gold or black color.