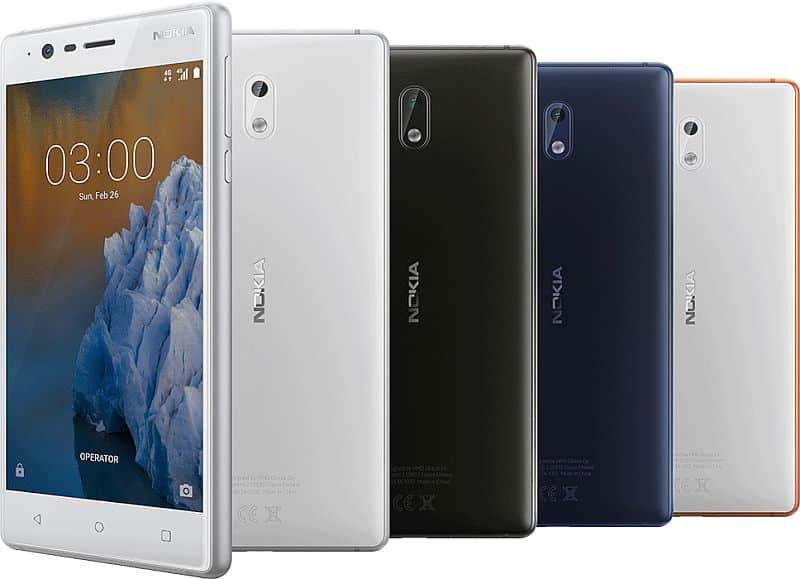 Nokia, a company that once led the Mobile phone market, died due its own arrogance by not following suit as other Smartphone manufacturers moved to Android. Nokia stayed behind with its Symbian operating system and later went on to use Windows.

Learning on the lessons of the yesteryear, Nokia is slowly but surely staging a comeback with its new line of phones, hoping to cash in on nostalgia and its brand name.

Today, at Mobile World Congress (MWC), Nokia has launched 4 smartphones (3 new and 1 old) with which they are hoping to grab the market once again – Nokia 3, Nokia 5, Nokia 6 (now global) and the crowd-pleasing Nokia 3310.

The cheapest of the 3 phones announced today is the Nokia 3.

Nokia 3 models are made out of polycarbonate and aluminum side frame, with a screen size of 5-inches.

As far as the hardware and performance is concerned, the Nokia 3 features 2GB of RAM, 16GB internal storage and a Mediatek 6737 quad-core processor.

The battery powering the phones is also a modest 2650 mAh. For the screen size that the Nokia 3 offers, this amount of battery is enough to keep you powered throughout the day.

8-megapixel cameras are offered for both the front and rear of the Nokia 3.

Perhaps the best part of the Nokia 3, or any other model launched today for that matter, is that it runs pure vanilla Android 7.1.1 Nougat. That means you will get faster software and security updates and a much smoother overall experience.

Nokia 5 is the mid-range smartphone offering by the Finnish brand.

It features a larger 5.2-inch HD display. You get an aluminum build with this phone along with curved edges, a design that is supposed to give the Nokia 5 a better feel in the hand and more aesthetically pleasing. 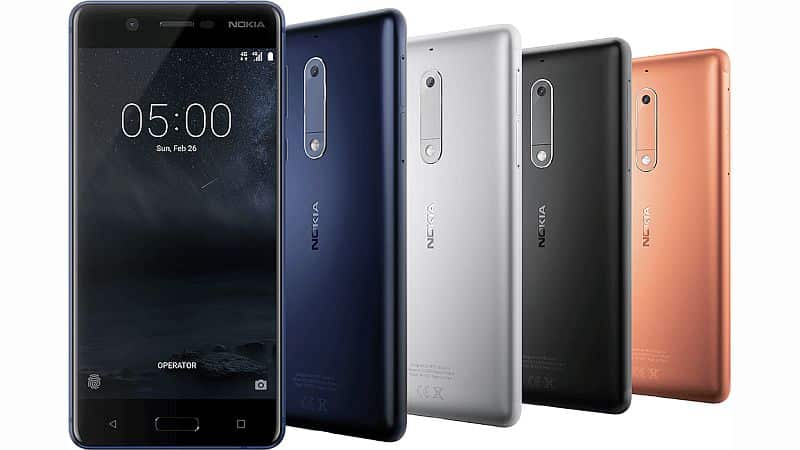 Internally, you get the same 2GB of RAM and 16GB internal storage as the Nokia 3. But the processor in this case isn’t a Meditek but actually Qualcomm’s Snapdragon 430. Just like the Nokia 3, it also runs Android 7.1.1 which is expected to receive timely updates.

As far as the camera is concerned, you get a 13-megapixel rear camera and a wide-angle 8-megapixel front camera.

Nokia said that HMD will be shipping the Nokia 5 worldwide in Q2 across the world and it is priced at 189 euros which comes at around 21,000 PKR. Color options are also the same as the Nokia 3.

No, this is not a typo since Nokia did indeed just “re-launch” the Nokia 6. Originally when it was announced it was a China-exclusive. However, with the relaunching at MWC, Nokia is taking the Nokia 6 global along with a few modifications.

Being the priciest of the 3, the Nokia 6 also features better specs than its siblings. With the Nokia 6 you get a 5.5-inch HD display. RAM is a generous 3GB, internal storage coming in at 32GB and all of this is backed up by the Qualcomm Snapdragon 430. 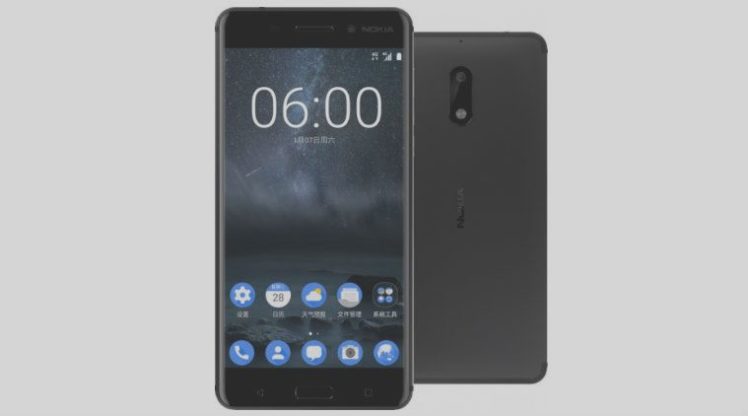 As far as your photography needs are concerned, you get a 8-megapixel front facing camera that is using a an upgraded wide-angle lens and auto-focus. The rear camera is a 16-megapixel shooter with dual tone LED flash.

The build quality is also premium as it is manufactured from a single block of aluminum and diamond cut edges. A limited edition version of the Nokia 6, dubbed the Arte Black, will also be up for grabs with 64GB of storage and 4GB of RAM while the processor remains the same.

The Nokia 6 is priced at a very impressive price of 229 euros that comes in around 25,000 PKR whereas the Arte Black edition is available for 299 euros (33,100 PKR). Both of these variants of the Nokia 6 will be available globally in Q2 this year.

It is clear from the launch today that Nokia has no plans to tap the flagship market at this point and instead targeting the low-end to mid-end market. For flagship models, we’ll have to wait a bit more.

Right now, the offerings looks promising. There’s no word on whether these devices will find their way into Pakistan or not but keeping in mind Nokia presence in Pakistan, we are expecting to see the devices here soon.