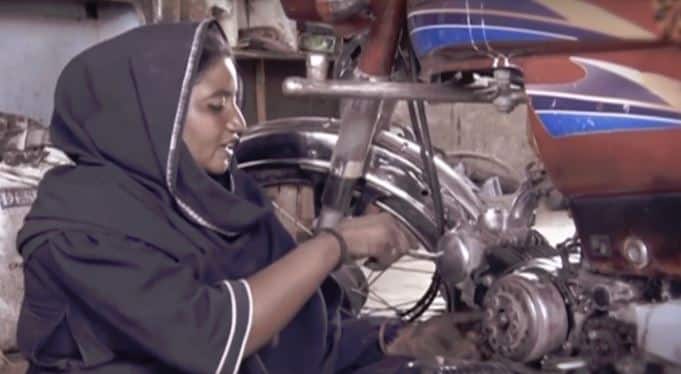 Pakistan has never been known for having a gender-diverse workplace culture. The situation might have improved a lot in recent years due to the steps taken by some amazing and courageous women, but the transition phase has been feeble and frustratingly slow. Some women, however, are taking this challenge head on by breaking stereotypes, one after the other.

Meet Laali, a lone woman from a remote district in Sindh, Pakistan, who is working in a profession which we, Pakistanis, have usually associated with men – repairing motorcycles.

Found working in a workshop in Badin, the main city and capital of Badin District in Sindh, Pakistan, Laali was recently featured by ARY Digital in a special segment of their Ramzan transmission, Shan-e-Ramzan. 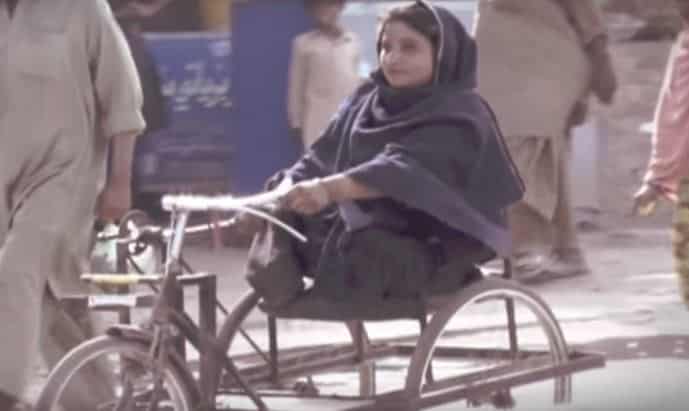 Born with a physical deformity in her legs, her movement is restricted. In this scorching heat where many of us won’t even think about walking barefoot, she has to rely on using her hands as a support to drag her body along or use a tricycle-like-vehicle to move about.

When she was barely a six-year-old, she was kidnapped and taken to Rawalpindi. She was forced to beg on the streets — something she detested very deeply.

Somehow, she managed to escape from the clutches of the beggar mafia and came back to Badin in search for her parents. She didn’t find her parents, unfortunately, and still doesn’t know about their whereabouts or even if they are alive or dead. Despite all this, she never gave up and has been overcoming one obstacle after the another.

“I made up my mind that I would not beg again. What if God has not given me legs, he has bestowed me all the body parts with which I could earn money by working,” she shared when invited on the program’s “Naiki Segment”.

She first started working for a tailor but didn’t feel comfortable working over there. She had come across a motorcycle mechanic shop on her way and decided to try her luck over there.

“I went to Riaz Bhai (the owner of the shop) and asked him to teach me the mechanical work,” she said.

Riaz, the owner, told her that it would be difficult as she is a girl, but she simply replied with “What if I am a girl? What I know is that I can work.”

Currently, Laali lives alone in a house in a slum in Talhar, another town of Badin District. Talhar is around 30 kilometers from Badin where the motorcycle mechanic shop is located. Daily, she has to take a public bus to the shop and back. With her physical disability, this makes everything even harder than it is already is for her. 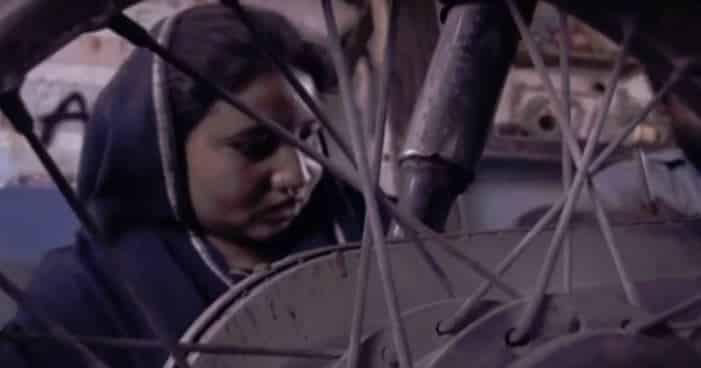 The show’s host, Iqrar-Ul-Hassan, requested the audience to help donate for the cause to help her open her own shop in her own house as well as get her own house.

Benazir Bhutto, the first woman in history to become the leader of a Islamic country, once said, “As a representative of women, let my message be to them, Yes we can!” There is still a lot of work that needs to be done, by both women as well as men. Fortunately, a lot of women, like Laali, have proven themselves up to the challenge by taking the not only the first step.