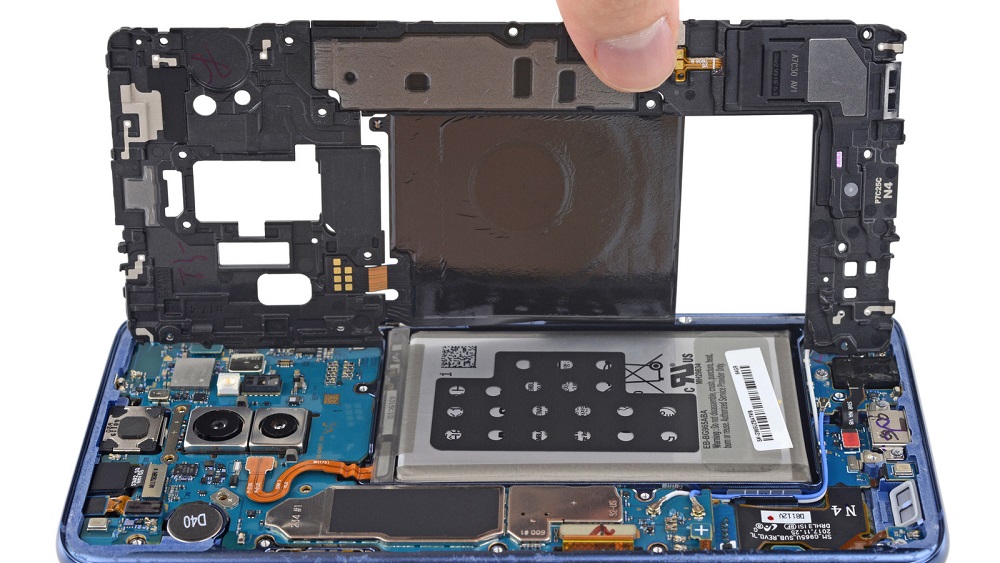 iFixit’s Samsung Galaxy S9 teardown reveals that the phone is mostly the same as the S8. The camera has been simplified somewhat but repairing the phone is nothing short of a hassle.

The newly unveiled Galaxy S9 has got the teardown treatment from iFixit, showing traces of last year’s S8 as well as a low repairability score.

The phone earned a score of 4 out of 10 for ease of repair, thanks to the “glass sandwich” design pioneered by the Galaxy S6 back in 2015.Unsurprisingly, it is not even close to the worst device iFixit has had to dismantle so it’s not that bad.

The curved display and the rear glass make it very hard to repair the phone without breaking anything. While several components are modular in nature, the phone has to be fully dismantled just to take the display panel out. Replacing the battery is also a bit of an “unnecessary challenge”. All of this while battling a tough adhesive.

The camera, which is a major addition to the S9, is the main difference here. Unlike typical cameras that come with a five blade aperture, the S9 comes with only two ring-like apertures, each for choosing between the f/1.5 and f/2.4 modes. The cameras are connected by a single PCB. Below it sits the fingerprint scanner, at its more natural position.

The camera and iris-recognition system are pretty much the same as the S8, which shows that the AR features like the AR Emoji and “improved” face detection is mostly software-based and hence not on the same level as the iPhone X’s custom built solution.

The battery is also the same as last year’s Galaxy S8+, at 3.85V, 3500 mAh. A number of different manufacturers helped provide the chips for the S9, including Toshiba, NXP, Qualcomm, Murata, Maxim, Skyworks, and Samsung.

Not Much of an Upgrade

While the S9 has proven to be a meaningful upgrade in its own right, the teardown only confirms that if you are stuck with the older Galaxy S8 and S8+, the Galaxy S9 is an upgrade you don’t really need, unless you need a better camera.