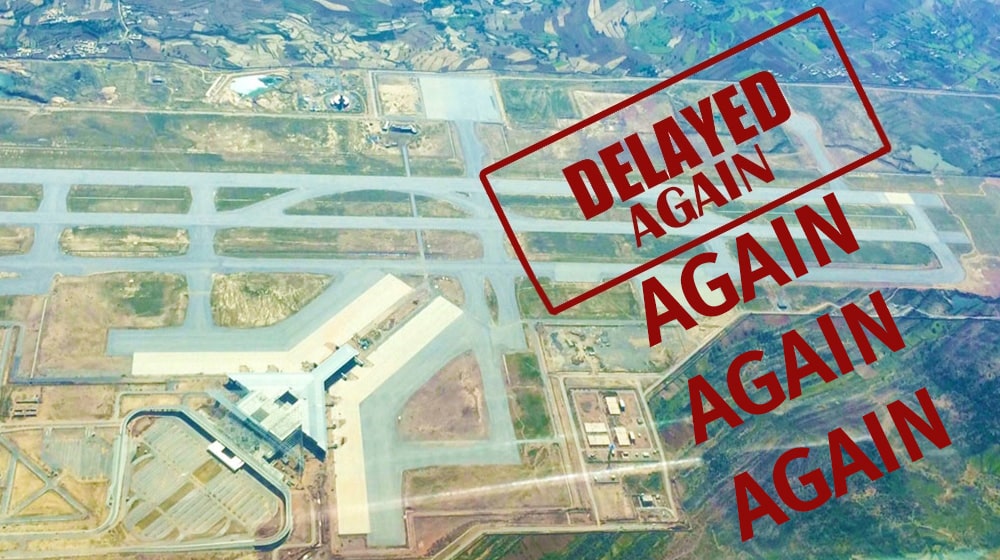 Operationalization of new Islamabad International Airport has yet again been delayed. Civil Aviation Authority (CAA) failed to test and finish equipment installation at the new airport.

During the visit, Sardar Mehtab was given a presentation about the progress of work at the airport. Sectary Aviation Division, Irfan Elahi, Deputy Director General CAA Amir Mehboob, Director New Islamabad Airport Nadir Shafi Dar, and other officials of CAA and ASF were also present.

During the inspection, it was disclosed that CAA has not been able to check the equipment and no emergency exercises have been performed at the new airport especially in the terminal building.

It was also reported that the cost of the airport has now reached Rs. 105 billion. Previously reported figures stated that it would cost Rs. 81.1 billion to complete all the work at the airport. When the construction started in 2006, the cost estimate was just Rs 37 billion which has now tripled.

This decision has also disrupted the commercial airlines which had already made necessary arrangements move operations to the new airport. Now, they have to delay shifting their equipment and staff to the new offices.

What Made the New Islamabad Airport a Disaster?

Multiple airlines, local and international, operating flights to Islamabad had already issued notifications to their staff and the public regarding the change of airport for flights taking off or landing in Islamabad. The airlines will now have to contact their staff and customers again and inform them about the move causing confusion among the public.

During the given time, CAA will perform checks in the terminal building, fix the non-functional equipment and perform safety drills.

It is worth mentioning that a few days ago the water pipeline at terminal baggage and cargo area leaked after some rains and the whole area was filled with water. Multiple videos were shared on social media and some media outlets reported that the airport’s launch had been delayed.

However, the very next day government officials claimed that these reports were frivolous and made-up by unreliable media outlets.

A source in the CAA told ProPakistani that many gates are not working and direction signs are yet to be placed. Due to this, not only passengers but staff will also find it hard to move around at the new airport. This could cause security and other issues for the management and staff working at the airport.

“There is no proper checklist of equipment installed at the airport. CAA hasn’t done any emergency evacuation, fire and smoke drills,” the source told.

The source also told that now CAA will run all equipment checks and if anything isn’t working as it should, it will be fixed in the given time.

There’s still no public transport connecting the airport to Islamabad and Rawalpindi, however, officials have claimed that a private company will start a bus service to the airport.

Despite the high cost and multiple delays, there’s still no housing facility for the CAA staff and there’s only partial accommodation for Airport Security Force (ASF). It remains to be seen how the CAA staff and ASF will be accommodated since the airport is situated far away from Islamabad and Rawalpindi.