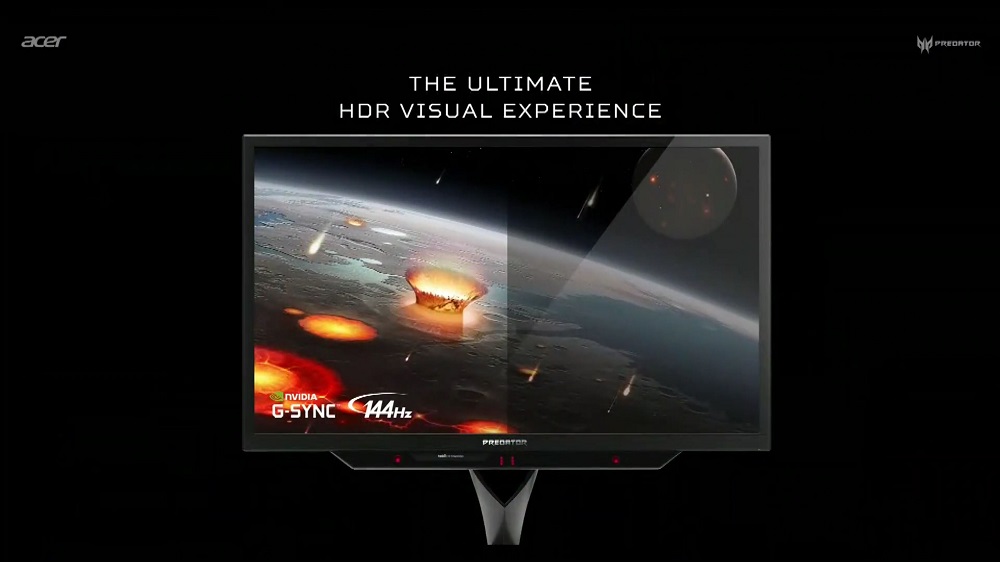 Who wants a 27-inch 4K gaming monitor with G-Sync support?

Acer is attempting to gain recognition for some of its gaming efforts, and that shows with the release of the new Predator X27, which is one of the best monitors we’ve seen this year, if not the best.

The monitor is the first 27″ one to be released in the market which comes with a G-Sync panel combined with HDR. It has a refresh rate of 144Hz, along with a 4ms response time and a 1000:1 contrast ratio.

It comes with 4K UHD (3840 x 2160) resolution (pixel density of 163 ppi), while the panel is an IPS one with Quantum Dot tech, providing a total of 385 backlight zones that work independently to provide deeper blacks. The brightness is also ground-breaking, coming in at 1000 nits at peak, or a typical rate of 600 nits over a continued period.

Professionals will admire the fact that the Predator X27 is highly accurate, coming with 99% coverage of Adobe’s RGB color gamut, while Tobii’s eye-tracking technology will bring some joy to gamers, too.

For connectivity, you get 4 USB 3.0 ports, while video output is provided by HDMI 2.0 and two DisplayPort 1.4 ports. The stand comes with support for VESA mounts, while also providing adjustments on three different angles.

For such cutting edge display technology, you’d expect a pretty terrific price-tag too, and you won’t be disappointed. The new Predator X27 will retail for $1999 when it comes out on the 1st of June. Gamers who want to experience G-Sync on 4K displays will be hard-pressed to find competing options right now.