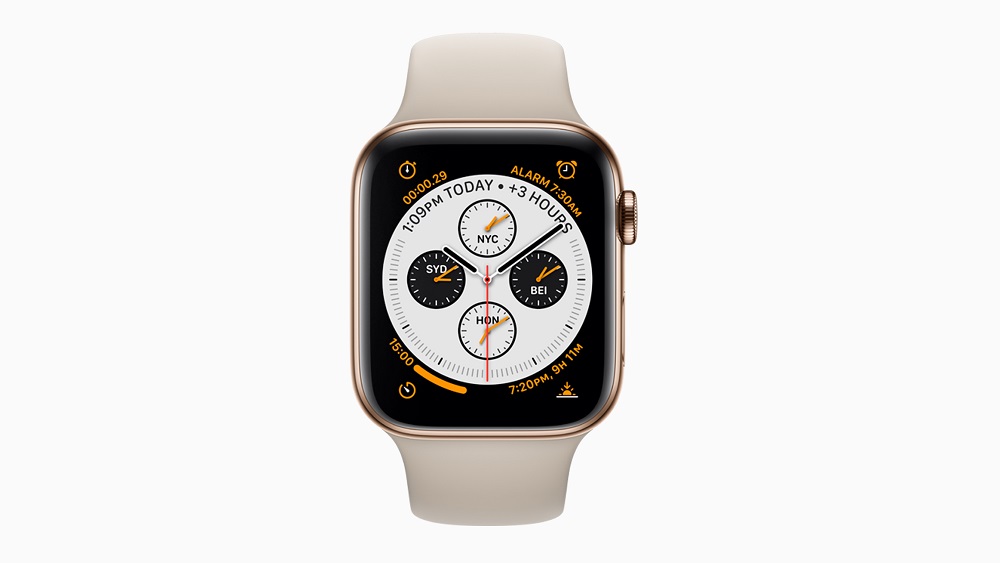 This year, the design is almost identical to the predecessors except the overall size. Last year’s models measured 38mm and 42mm, the Watch Series 4 comes in 40mm and 44mm sizes with 35% larger size and 32% bigger displays. The new design allowed the company to fit larger displays than before.

The new watches now come with ceramic and sapphire backs. Unlike the predecessor, all variants including the LTE one’s will have this option. There’s haptic feedback in the crown, as well as better speakers (50% louder than Series 3) to work along with the bigger display.

The OS has been updated to display more content than before, however, there’s still no always-on display feature.

As you’d expect from a good smartwatch, it comes with all the usual sensors including fitness tools, step counter, and other essentials. What’s new is that Watch Series 4 now has a newer ECG (electrocardiography) monitor that promises better heart rate tracking.

The new sensor is approved by FDA, so it can be used to keep a check on your heart rate. It also monitors any irregularities by tracking the heart rate rhythm and notifies you if it detects any abnormalities. Another feature is an advanced gyroscopic sensor and accelerometer, that is able to detect when a user falls down.

For example, if you fall from a high place, the watch will show you a prompt and ask you if you’d like to call for help. If you don’t move for more than 5 seconds, Siri will then automatically call an ambulance.

Underneath, Watch Series 4 is powered by Apple’s 64-bit dual-core S4 chipset designed specifically for smartwatches. This new processor is 2 times faster than the predecessor.

There’s no word on the battery, Apple decided to keep the specifics a secret. However, you can expect at least 18 hours of usage, given the size of the screen and new hardware. It has lighter Bluetooth 5.0 LE connectivity support to preserve more battery life.

Being an Apple product, the prices are quite hefty starting at $399 for the GPS only version and $499 for the LTE version. They’ll be made available at the end of next week, on September 21, with pre-orders beginning a bit earlier on September 14.

It’ll be available in a number of different straps, and users can also use the one’s that were released before. Of course, it will also be available in a Gold Stainless Steel finish, for those who wish to spend a little extra.