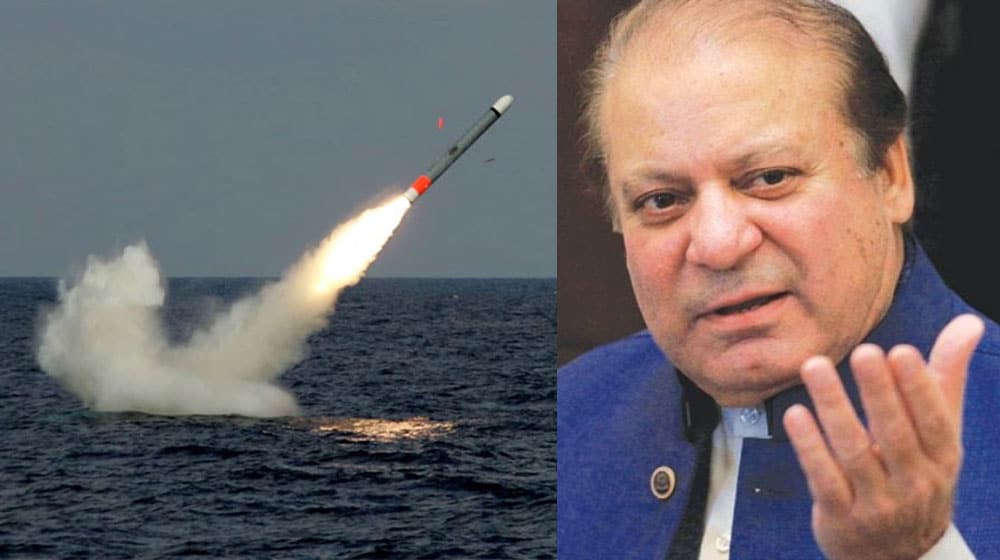 Ousted Prime Minister, Nawaz Sharif, became a laughing stock on social media for claiming to have built Tomahawk – the US subsonic cruise missile. He made these comments while speaking to media outside his residence in London.

I built the tomahawk missile. When Clinton fired a rocket at Afghanistan, one of them fell in Balochistan. We brought it and did its engineering,” Sharif said in a video shared widely on social media.

The former PM also claimed that the JF-17 Thunder and many of the missiles that the Pakistan Army currently possesses were developed on his orders.

When the PML-N Quaid was making these claims, the expressions on the face of Ishaq Dar, standing beside him, were rather disturbing.

As soon as Sharif finished speaking, Dar whispered in his ear that it was another cruise missile and not Tomahawk.

Sharif’s claims went viral instantly, and people began to make interesting comments about his statement. While some laughed it off, others believed that the three-time Prime Minister has committed treason by leaking ‘national secrets’ on foreign land.

Azhar Mashwani, the focal person to Chief Minister Usman Buzdar, joked that Pakistan was also made in the Ittefaq Foundry.

Mashwani also busted his claims by saying that Nawaz shamelessly tried to take credit for the work of others. In a separate tweet, he shared a documented proof to establish that Pakistan started working on JF-17 Thunder in 1995 and its prototype win 2003.

The nation knows the story of missile technology and atom bomb … Who is he fooling?

Though Sharif walked back on his tomahawk statement within seconds, he provided meme material to Pakistanis. The following are some of the most hilarious responses to Sharif’s statement:

rare picture of Mian Sahab after capturing a tomahawk missile and presenting it to the Armed Forces to Reverse Engineer. pic.twitter.com/BAe1rTmcDz

Look at t way he explains

1.He can’t even pronounce Tomahawk

2.His hand movement as if Tomahawk travels like a fish; he thinks it goes underwater😂

3.What secrets,Zardari was booted out of Kahuta.Pak Army will not let a traitor come even close

Difference Between Cruise and Tomahawk Missiles

From a technical perspective, no! Tomahawk is also a specific type of cruise missile. It is a long-range subsonic, all-weather, and nuclear-capable missile created by an American weapons manufacturer, Raytheon. They were used against Al-Qaida in Afghanistan.

Ehsan Mani Orders Misbah to Either Quit PCB or SNGPL

No! It has long been rumored that Pakistan stole the US missile technology to launch its Babar missile series. However, the claim has been rejected by retired General Amjad Shoaib and Atomic Scientist, Dr. Samar Mubarakmand.

When BBC reached Dr. Samar for a comment, he said it is true that one of the missiles did drop in Balochistan. He, however, contradicted the claims that they were found in good condition.

He also rebuffed Sharif’s claims that Tomahawk was reverse-engineered by defense scientists.

This is not technically possible, because even if you copy the structure, the real work is the software, which is completely under the control of the manufacturer.

The renowned scholar further said that Pakistani scientists worked day and night on this program and developed these missiles locally. He noted that the work on the Babar Cruise Missile began in 2000, and Babar One was successfully tested in 2005.