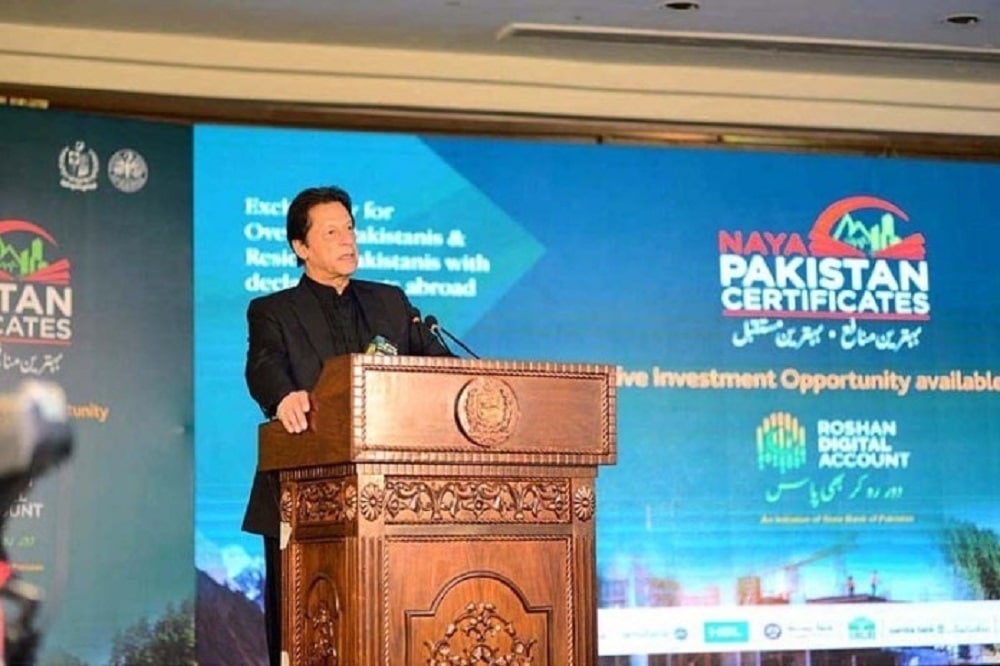 Naya Pakistan Certificates is an initiative of the Ministry of Finance and administered by the State Bank of Pakistan (SBP) to offer attractive investment opportunities to overseas Pakistanis and resident Pakistanis with assets held abroad.

These certificates are available in both conventional and Shariah-compliant versions.

Addressing the audience, the Prime Minister explained how his economic team has successfully tackled the economic challenges facing Pakistan and put the country on a path of prosperity.

He acknowledged the contribution of overseas Pakistanis in addressing the pressing issue of external account deficit by continually increasing home remittances. He said that the government is working on innovative initiatives to provide attractive avenues of investment and saving for overseas Pakistanis.

The Prime Minister remarked that the initiative of Naya Pakistan Certificates would add further value to the RDA. He encouraged overseas Pakistanis and resident Pakistanis to invest in NPCs through RDA.

The Prime Minister lauded the efforts of Adviser to the Prime Minister on Finance and Revenue, Dr. Abdul Hafeez Sheikh, and SBP Governor, Dr. Reza Baqir, for introducing the Naya Pakistan Certificates.

NPCs are sovereign instruments, denominated in USD and PKR, issued by the Government of Pakistan under the Public Debt Act, 1944, and NPC Rules 2020. The certificates can only be purchased through Roshan Digital Accounts – an initiative of State Bank of Pakistan, which was launched in September 2020.

NPCs offer attractive returns over different maturities. These special certificates are available in both conventional and Sharia-compliant versions. Resident Pakistanis who have declared their assets abroad can also invest in USD denominated NPCs. Information regarding NPCs is available at https://www.sbp.org.pk/NPC/index.html.

The return on NPCs is subject to a 10 percent withholding tax, which is the full and final settlement of tax obligation on NPC profits. Furthermore, the overseas Pakistanis are not required to file a tax return on account of their earnings on NPCs.

Adviser to the Prime Minister on Finance and Revenue, Dr. Abdul Hafeez Shaikh, also addressed the audience on the occasion. He highlighted the various economic challenges faced by the country, specifically the COVID-19 pandemic, and also underscored the relief and economic stimulus initiatives taken by the Government of Pakistan.

He emphasized that the incumbent government under the leadership of Prime Minister Imran Khan is making effective efforts to resolve all the inherited economic woes of Pakistan. The Advisor to PM said that the launch of NPCs is a significant top-up to the Roshan Digital Account aimed at providing an attractive investment opportunity to the overseas and resident Pakistanis.

He was optimistic that overseas Pakistanis would fully utilize this opportunity to invest in NPCs.

In his address, SBP Governor, Dr. Reza Baqir, noted that the initiative of NPCs by the Ministry of Finance and the Roshan Digital Accounts initiative of SBP would go a long way in meeting the demand of overseas Pakistanis for facilitating their smooth access to the financial sector in Pakistan and provide investment opportunities to them as well as resident Pakistanis.

Also, these two initiatives will help the country not only in tapping the valuable financial resources but will also become a more consistent, reliable, and long-term source of foreign exchange flows in the country.

Sharing the data on Roshan Digital Accounts, the Governor said that the outcome of the initiative has been satisfactory and encouraging. He said that over 36,000 RDAs have been opened in less than two months, fetching over USD 65 million. He informed that the number of accounts and amounts remitted, and investment is growing by each day.

Ministers, parliamentarians, presidents and CEOs of banks, and senior officials from SBP attended the ceremony.