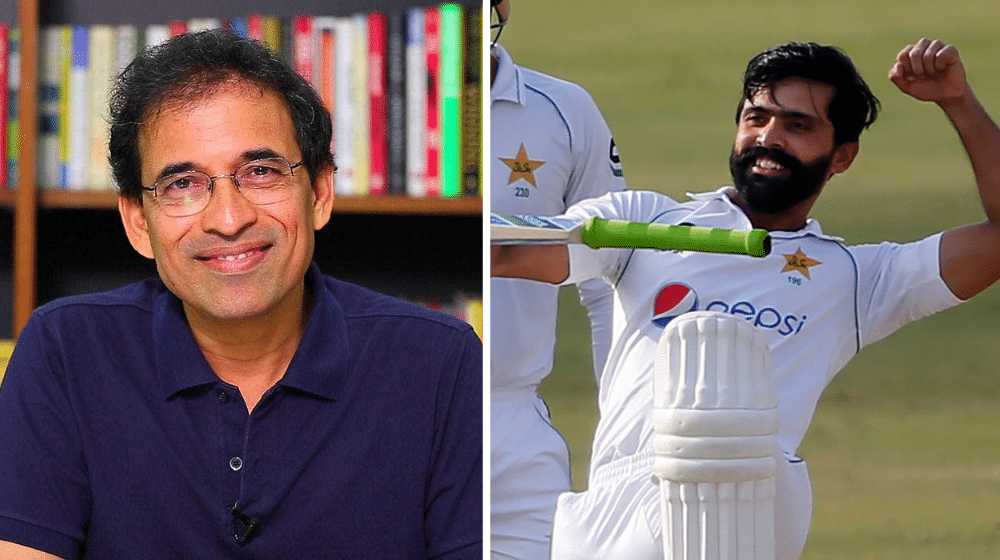 Fawad Alam has been garnering praise from all over the world for his gutsy century against South Africa in the first Test match. A century in Test cricket does not create such a stir in the cricketing world, but this one was special. This was Fawad’s second century after a comeback to the national team after ten years and his first century in his first Test match on his home turf.

Former West Indian fast bowler, Ian Bishop, praised Fawad’s brilliant knock on Twitter as soon as he crossed the hundred-run mark, and then a few hours later, former cricketers and cricket experts started to shower him with praises as well.

Famed cricket commentator from across the border, Harsha Bhogle, had the most unique take on Fawad’s career. Bhogle compared Fawad’s career to old Indian movies.

Bhogle tweeted, “Been reading a little more about Fawad Alam. Like an old Hindi movie where the hero accepts all that fate throws at him and finally gets his reward at the end; when it is almost too late.”

Been reading a little more about Fawad Alam. Like an old Hindi movie where the hero accepts all that fate throws at him and finally gets his reward at the end; when it is almost too late.

Sarang Bhalerao, a producer and cricket analyst for Star Sports India, replied to the tweet with a fun fact about Fawad Alam.

Former Indian cricketer, Wasim Jaffer, who suffered a similar fate as Fawad Alam, scoring heaps of runs in the domestic cricket and did not get a proper chance to establish himself in the national Test team, also congratulated the Pakistani middle-order batsman. Wasim’s tweet felt heartfelt as he acknowledged Fawad’s ability to bat at the international level.

You don't need to change your stance @iamfawadalam25, but the detractors might soon change their stance about you! Well batted 👏 Always believed you have what it takes to perform at this level. #PAKvSA https://t.co/oSGQEDpcYK pic.twitter.com/6V1peX4JnW