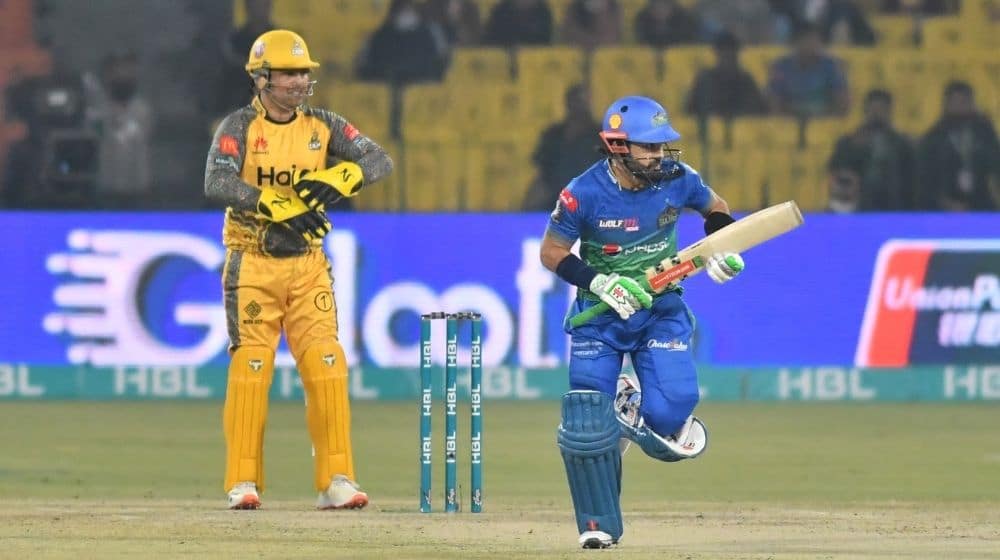 Multan Sultans extended their lead at the top of the PSL 2022 points table as they won their sixth consecutive match in the competition. Peshawar on the other hand are in trouble as they lost their fourth match in the tournament and stay at the fifth spot in the table.

Multan got off to another solid start as their openers Shan Masood and Mohammad Rizwan put up a 98-run stand at the top of the order. Explosive batter, Tim David provided the impetus with some huge sixes and helped Multan to a challenging total of 182/7.

Peshawar on the other hand were poor from the start. Their batters were unable to adapt to the conditions and some clever bowling from Multan Sultans restricted them throughout their innings. Peshawar were ultimately bundled out for 140 as Multan won the match by 42 runs.

Shan Masood was named as player of the match for his scintillating half-century. Shan scored 68 runs off 49 balls, his innings included 8 fours and 1 six.

Multan Sultans will face Peshawar Zalmi in the 16th match of the PSL 2022 on Thursday, 10 February. The match, scheduled at Lahore’s Gaddafi Stadium, will start at 7:30 pm PKT.

Multan Sultans will be hoping that the change of venue does not bring around a change in their fortunes as they look to continue their winning run in PSL 7. Peshawar Zalmi, on the other hand, will be looking to bounce back after a disappointing defeat in their previous encounter against the same opposition and climb up the PSL points table to get back into the coveted top four spots.

Multan Sultans have been the best team in the competition. They have been magnificent in all three departments of the game and have blown away every opponent they have faced in the tournament so far. They look like a well-balanced side and will be the team to beat in the Lahore leg of the competition.

Peshawar Zalmi have faced some problems with the balance of their side. They will be hoping that their batters will be more suited to the pitch conditions in Lahore and the bowlers can also adapt to the conditions quickly. Zalmi will be boosted by the return of Liam Livingstone for the rest of the tournament but he might not be available for this match. All in all, Zalmi do possess a lot of talent in the team and will be determined to become the first team to beat Multan in PSL 7.

Both the teams are expected to make changes to their line-up. Rilee Rossouw, David Willey, and Rumman Raees are all expected to be recalled to the line-up in place of Johnson Charles, Anwar Ali, and Blessing Muzarabani. Peshawar are expected to hand a debut to Arshad Iqbal in place of Salman Irshad.

Overall, the two sides have come face to face 10 times in the tournament. Sultans have an upper hand as they have won 7 while Zalmi have won 3. They last played against each other in PSL 7 on 5 February 2022 at National Stadium Karachi. Multan emerged victorious with 57 runs.

Last year’s player of the tournament, Sohaib Maqsood has so far been unable to replicate his form this season. Multan will be hoping that Maqsood can get back into form and play an influential role this season as well. Maqsood himself will be looking to perform at the highest level and potentially get back into Pakistan’s national T20 side once again.

Haider Ali has shown glimpses of his class this season but the talented young batter has been unable to stamp authority in any of his innings as of yet. Zalmi will be hoping that Haider can regain his momentum and play a crucial role for them for the rest of the season.