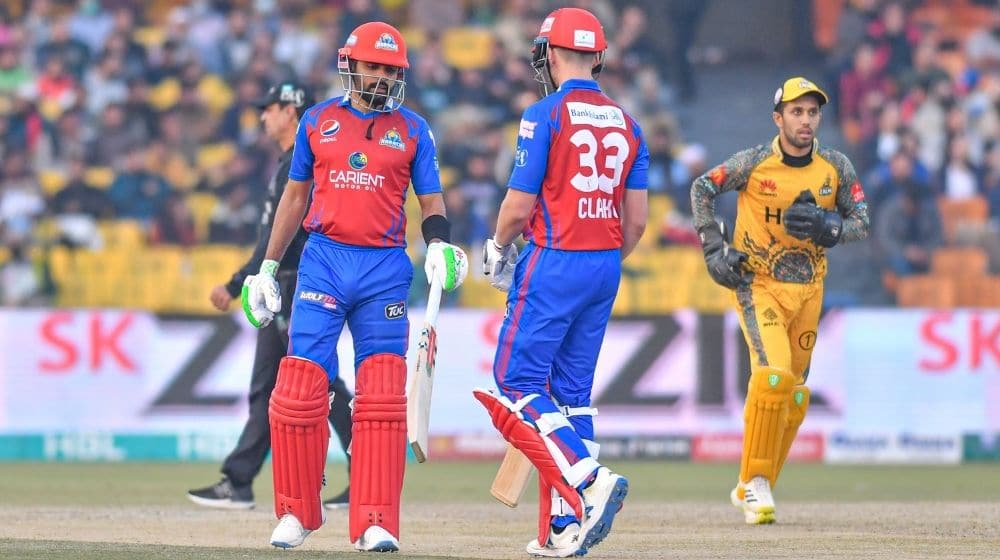 Karachi Kings suffered their sixth successive defeat as Peshawar Zalmi emerged victorious in the 19th match of PSL 7. As a result, Karachi are on the brink of elimination and would need a miracle to make it to the PSL 2022 playoffs. Peshawar, on the other hand, are on the fifth spot, level on points with fourth-placed Quetta Gladiators.

Peshawar got off to a formidable start as debutant Mohammad Haris took the charge to Karachi’s bowlers. Hazratullah Zazai scored a scintillating half-century and late fireworks from Shoaib Malik and Ben Cutting helped Peshawar to a challenging total of 193/6.

Karachi continued their horrid show with the bat. They lost Sharjeel Khan early in the innings and their run rate in the powerplay left a lot of work to be done in the rest of the innings. They were unable to increase their scoring rate as Zalmi bowlers choked the run rate. They could only manage 138/6 as Peshawar won the match by 55 runs.

Debutant Mohammad Haris was named as the player of the match for his exceptional knock. He scored 49 runs off 27 balls and his innings included 3 fours and 4 sixes.

Karachi Kings will face Peshawar Zalmi in the 19th match of the PSL 2022 on Sunday, 13 February. The match, scheduled at Lahore’s Gaddafi Stadium, will start at 2:30 pm PKT.

Karachi Kings will be determined to get their first win of the competition and begin their journey to bounce back in the tournament as they face an inconsistent Peshawar Zalmi side. Zalmi, on the other hand, will be hoping to win their third match in the competition and keep the pressure on Quetta Gladiators for the coveted top four spots in the table.

Karachi are yet to win a match in the tournament and sit at the foot of the table. They will be hoping that a change in venue can bring about a change in their fortunes. They will be counting on their experienced players to step up and get the team back on track.

Zalmi are in a similar dilemma as some of their experienced players have been unable to perform at their usual standards. They will be relying on their international star power to come good and carry them to their seventh successive PSL play-offs.

Both the teams are expected to make changes in their line-up. Pakistan’s Under-19 captain, Qasim Akram is likely to play his first match in the competition for Karachi. As for Peshawar, Tom Kohler-Cadmore and Usman Qadir are expected to make their way into the line-up.

Overall, the two sides have come face to face 16 times in the tournament. Zalmi have an upper hand as they have won 11 while Kings have won 5. They last faced each other on 4 February at National Stadium Karachi which Peshawar won by 9 runs.

Sharjeel Khan’s form at the top of the order has been a real concern for Karachi Kings. The explosive opener will be determined to get back to his usual best and help his side to their first victory in the competition. Karachi has so far been unable to score heavily and Sharjeel’s form has been a major factor in that.

Young batter Haider Ali has been disappointing so far in the competition. Zalmi will be hoping that he comes back into form and sort out their batting line-up issues. Haider himself will be determined to prove his critics wrong and showcase his talents.