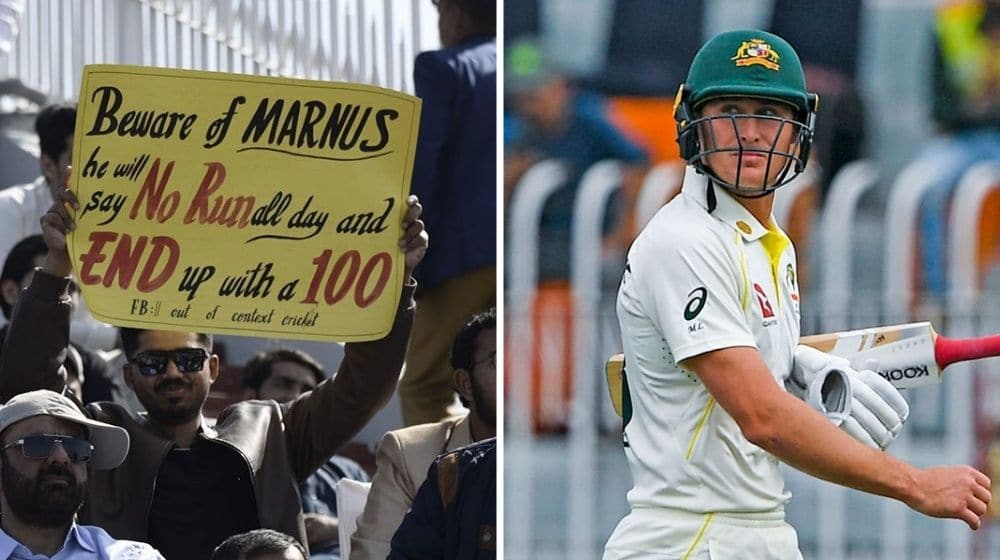 The number one Test batter in the world, Marnus Labuschagne seems to be enjoying playing in front of a passionate crowd at Rawalpindi Cricket Stadium. Marnus has witnessed a meteoric rise in international cricket ever since his debut a few years ago and is widely regarded as one of the best Test batters in the circuit currently.

His unorthodox batting style and animated approach have also made him one of the most popular figures in the cricketing fraternity. While the Pakistani fans at the Rawalpindi Cricket Stadium voiced their support for both the teams, Marnus was one of the players who were extremely popular with the crowd.

I've loved seeing all the signs in the crowd at Rawalpindi and want to acknowledge as many as possible to say thanks for the welcome 👋 so.. share your signs below 🇦🇺🇵🇰#AUSvPAK

Let’s have a look at some of Marnus’ favorite posters.

This one was great pic.twitter.com/ckIACmNViO

Haha. For anyone wondering.. here's the answer 😂 https://t.co/xEZgg2FUZ0

😂 one day i'll open the cafe to everyone https://t.co/J88Nhdl2Tg

Marnus scored a magnificent half-century in Australia’s first innings of the first Test match against Pakistan. Marnus has been exceptional in his short Test career so far. He has scored 2,220 runs at an average of 56.92 in 40 innings he has played in the longest format of the game.

The 27-year old will be looking forward to the second Test match at National Stadium Karachi. The match is set to commence on Saturday, 12 March.