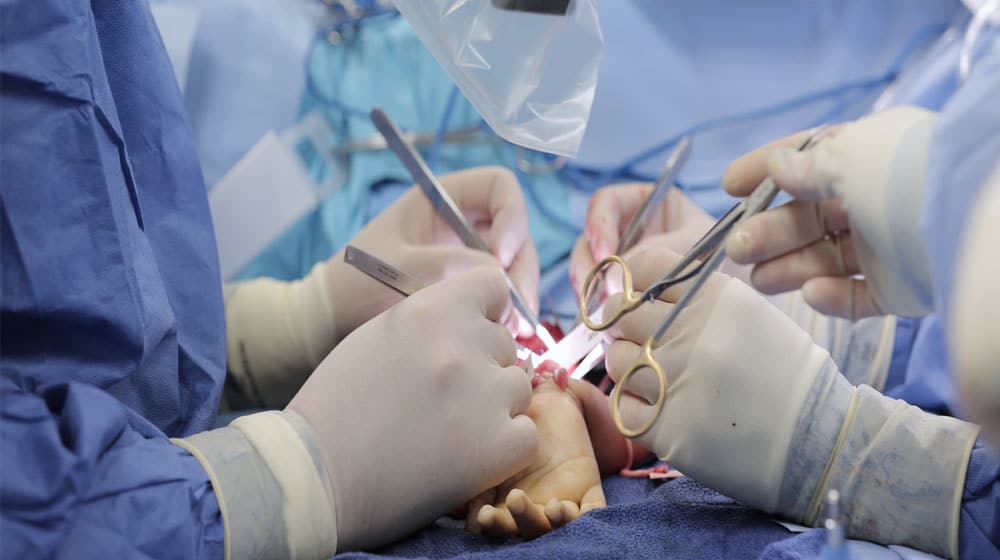 A young boy’s hands, which were severed by a spinning blade machine, were re-implanted during a 10-hour-long procedure in what seems to be a unique surgical intervention in Pakistan.

Doctors have termed it the first incident of re-implantation of a minor patient’s hands in Pakistan. They also claim it to be the first in Asia, saying that the researchers could not discover a recorded case of an individual’s two hands being re-implanted in any country in the region.

As per details, the five-year-old boy was rushed to the Okara District Headquarters (DHQ) Hospital after his hands were chopped off in a spinning blade machine at his home.

Doctors at DHQ Hospital promptly referred him to Lahore’s Children’s Hospital, with his hands kept in an ice jar.

Surgeons in Lahore praised the DHQ Hospital’s prompt move, adding that in such circumstances, the odds of a successful surgery rose exponentially when a patient arrived within six hours after the occurrence with the preserved hands.

“There were too many risks in re-implanting the hands directly to the arms as the tissues of the severed part of the body were damaged badly,” said Dr. Rao, the lead surgeon.

He said that the boy was shifted to the hospital at night when he and his team were home after completing shifts.

“I got an emergency call from one of my junior colleagues who said that a minor boy has arrived from Okara with his two severed hands,” Dr. Rao said.

He said that the surgeons reached the hospital at the earliest. “We started the operation at around 10 PM and completed the successful procedure the next day at 9 AM,” he said, adding that it was a challenging surgical intervention that took the entire night.

The procedure was performed a month ago, but the patient was kept under observation to verify that it was successful, he said. “We feel proud to announce that the test reports have declared the operation successful and we have discharged the patient today (Thursday),” Dr. Rao said.

He added the next phase of rehabilitation has started and the hands would start functioning completely after six to nine months.

Dr. Rao and his team have successfully re-implanted the hands of 50 children at his hospital during the last few years.