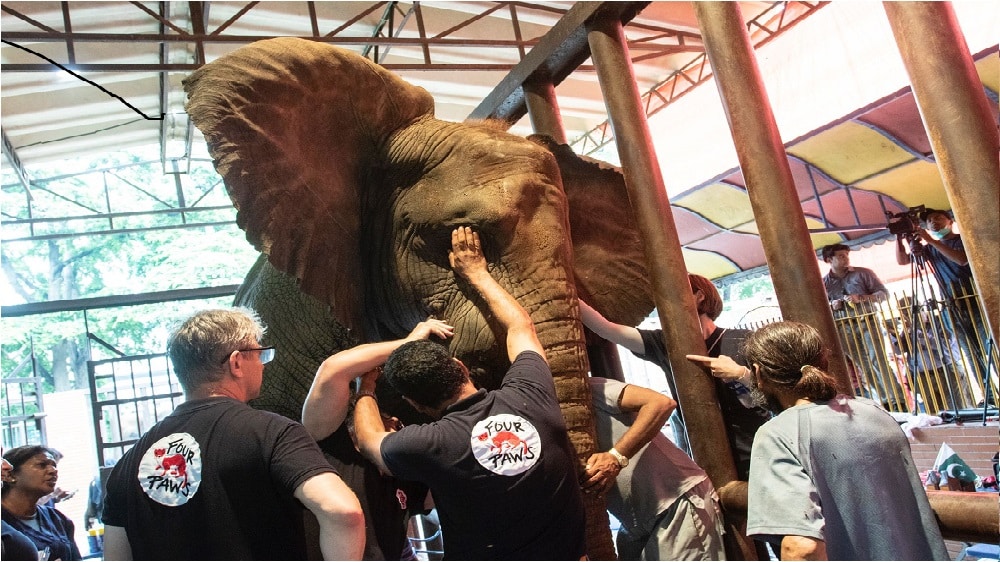 FOUR PAWS International’s veterinary team successfully operated on the second elephant, Noor Jehan, at Karachi Zoo yesterday, and she is said to be doing well.

Sandra Hoenisch, who heads Digital Communications at FOUR PAWS International, stated in a press release that the surgery on her 21 cm long right tusk had lasted 3 hours and 40 minutes, and involved cutting and flattening the tusk and removing the inflamed surrounding tissue.

Her tusk was reportedly not as rotten as that of the other elephant, Madhubala, who was operated upon yesterday.

Noor Jehan is said to have received pain killers, antibiotics, and vaccinations, and the team stated that her left tusk seemed to be fine. While it did not find any inflammations, the team did discover a small tumor and removed it.

While the wound will need daily flushing twice a day, Noor Jehan is doing well, as per the statement, and was reunited with her partner, Madhubala.

Madhubala’s surgery at the Karachi Zoo on Wednesday had lasted for five hours and 40 minutes – the longest operation of an elephant under standing sedation that has ever been done, as noted by FOUR PAWS.

After performing an endoscopic examination, the international veterinary team, headed by the renowned vet, Dr. Amir Khalil, decided that only her right tusk required treatment. During the operation, it was found that Madhubala’s 45 cm long tusk had rotted badly. After the tusk was extracted, the elephant was vaccinated and administered antibiotics and pain treatment.

Both the elephants were provided with food as per the post-treatment dietary requirements (low-energy food without sugar), and their wounds will be examined by the veterinary team in the next few days.

Noor Jehan and Madhubala are two of four African elephants being treated in Karachi by an eight-member team from the global animal welfare group – FOUR PAWS International. Its latest mission in Pakistan follows an order by the Sindh High Court (SHC) last year for it to assess the health of the animals after local animal rights activists had petitioned about the condition of the elephants.

In her update, Hoenisch mentioned that the team gave the elephants their last on-site check-up today.

She said, “Madhubala and Noor Jehan are doing fine! Both were already reunited shortly after the second operation yesterday. We also checked up on Malika and Sonia (former Sonu) at the Safari Park. Both are now outside during the day, enjoying the large green enclosure”.

Their health has also improved. They are fitter and due to the new regular foot care, the condition of their feet has improved. Our team will now hand in the surgery report together with further husbandry recommendations to the Sindh High Court.

Working under Dr. Amir Khalil, who is also FOUR PAWS’ Director of Project Development, the organization also successfully treated and relocated ‘the world’s loneliest elephant’, Kaavan from Islamabad’s Marghazar Zoo to a sanctuary in Cambodia in 2020.