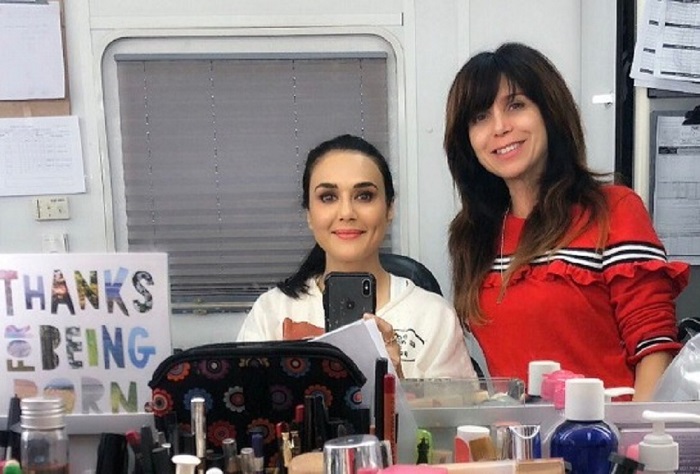 Preity Zinta tweets from Fresh Off the Boat set.

Bollywood actress Preity Zinta sent a ripple across social media when she tweeted a picture with someone who bears an almost eery resemblance to Mahnoor Baloch. Zinta posted the picture from the makeup chair on the set of her new Holywood project, ABC’s hit sitcom Fresh Off the Boat.

Leaning on her shoulder was a woman who left us wondering whether Lollywood and Bollywood were both hitting the American small screen.

Amazing how a change of scene can make U feel like a newcomer! On location to shoot Fresh Off The Boat. Now that the first day of shoot is over & I’m still alive & not shaking with nervous energy here’s a photo🤩Loving & absorbing it all. #day2 #Fotb #abcnetwork #foxstudios #ting pic.twitter.com/dyFCFaeHoQ

Turns out that we may have found Mahnoor Baloch’s doppelganger.

The Kal Ho Na Ho actress later clarified that the woman in the photograph was in fact not Mahnoor Baloch—it was her makeup artist.

Zinta cleared up the confusion in an Instagram comment, claiming that the woman was actually not Baloch but Cindy, head of the makeup department on the Fresh Off the Boat set. 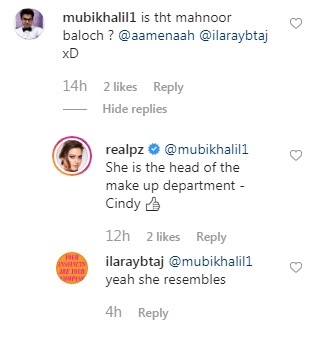 Baloch herself was recently seen in Karachi, opening an art exhibition earlier this week. She is not shooting Fresh Off the Boat.

Fresh Off The Boat

Fresh Off the Boat is a show about a Taiwanese immigrant family, the Huangs. It first aired in 2015 and is currently in its sixth season. It is historically the first show about an Asian-American family and has made great strides in terms of representation.

The show is based on American chef Eddie Huang’s memoir. Huang is a celebrity food personality who previously hosted the show Huang’s World for Viceland.

Zinta’s inclusion in the cast is another win for the representation of immigrant minorities and their experience on American television.

The sitcom is Preity Zinta’s first foray into Hollywood, fitting since the show is based on being new in America and living the American dream as immigrants.

“Amazing how a change of scene can make U feel like a newcomer!”

Zinta is a veteran actor best known for Bollywood hits of the noughties like Veer-Zara, Koi…Mil Gaya, and Kabhi Alvida Naa Kehna.

Although Preity Zinta is fresh off the boat in Hollywood, she is not leaving Bollywood too far behind. She will feature in the upcoming Salman Khan film, Dabbang 3.  Indian comedian Vir Das is also joining her on the of Fresh Off the Boat.