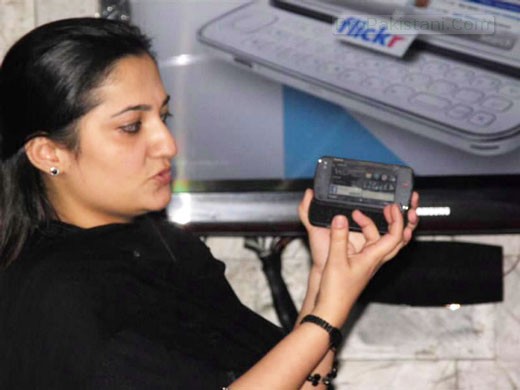 Nokia came different this time with the launch of the latest flagship the N97 without using traditional media and called for Nokia first Bloggers Meetup on Friday – 22nd May ’09 at 6:30 pm at The Sports Bar – Karachi, gathering numerous prominent bloggers from the Pakistan technology scene.

The event was exclusive and invitation only so the crème de la crème of tech bloggers were there. Umair Mohsin, of Tuesday.com.pk (a long story why he calls it Tuesday visit his site for info) & Husnain Shaban –  Nokia Guru @ Internet fame to people working at and for Nokia from Ayaz and Waqas of Synergy to Adeel and Khurram of Nokia Pakistan.
The preamble was given by Adeel Hashmi of Nokia who introduced the keynote speakers of the day. Mr. Khurram Pradhan, Portfolio and Planning Manager Nokia (a guy to meet – who knows all about Nokia with a lot of inside info), Miss Shabana Shahzad –  Program Manager who has been assigned with the responsibility of managing Nokia N97 allocation, ordering units, and launching programs.

The first presentation was given by Khurram Pradhan who explained how Nokia is very impressed by the blogger community’s insights, evident in the E75 launch. He communicated that Nokia hopes to be part of this community constantly as all Tech bloggers have a good sense of understanding of advanced technology. 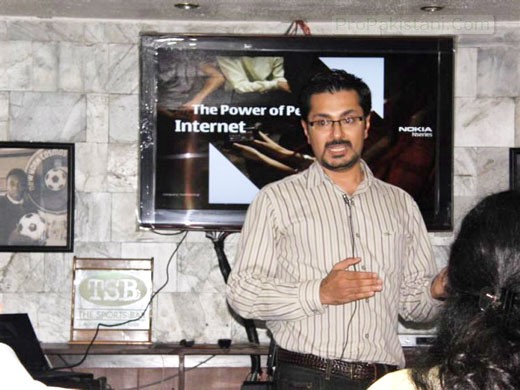 Khurram continued his talking about upcoming mobile trends and transforming technology as Nokia has been working for last decade to connect internet with Phones, enhancing the best sources of telecommunication globally. He further carried on the competition of dominating the 4th Screen, presented by different mobile phone companies like Apple, which transformed itself from a primary 3rd screen (computer) developer to 4th Screen powerhouse (iPhone) and Google – covering it via software like mobile apps to traditional competitors like Samsung and the Chinese.

Khurram also discussed how Nokia is making the internet personal, I agree my facebook is different from another, I have my unique favorites – different from anyone else in the world so Nokia is doing the same, in a world where out of the 1.3 billion internet users 520 million people access internet on Mobile Phones where it’s forecasted that by 2012, 3 billion people will be accessing the net out of which 1.5 billion will access it through mobile phones and  Nokia want to be a dominant player in this domain during all this.

Nokia is foreseeing to capture the market where 93 million people are using social networks, 8.2 million people are downloading maps for their mobile devices 22.3 million access the net everyday on their devices to get the latest informative news and 184 million blogs are present here, talking about everything under the sun with 77 % of them actively commented by their readers.

Nokia wants people to experience their virtual world where 200 million logon to Facebook , 125 million are on My Space , 9  millions are Tweeting on Twitter , 44 million users access Flicker’s library of billions of photos and 5 billion videos are on Youtube,  the largest video library on the web, providing entertainment and information. Nokia wants people to have access to their friends, their networks, their entertainment and their business communications on their fingertips through the home screen of N97 via Widgets, standalone programs, and working on their particular functions like Face Book widget will keep on updating your friends’ status, Bloomberg widget will keep on updating the selected stock quotes.

Nokia customer care center is the universal part of their device’s 2 dimensional strategy , i.e devices for  People ( 1ST  Dimension)  TO stay connected at every Place ( 2ND  Dimension)  and N97 together with OVI, giving this exclusive experiences.

Nokia’s vision is not limited to the present; they are foreseeing the future far ahead and busy in making Symbian open source with assistance of its 4 million developers at Nokia Forum, as Nokia has a bright future in upcoming applications.

Here Khurram’s presentation ended and Q& A session started, Husnain started the Q &A and asked about OVI services to be available for everyone and Khurram answered that S30-S40 to S60 OVI services are available for everyone in shape of Life Tools for the low end devices to OVI Mail on S40 to OVI Files and OVI Share on S60 . Husnain also asked that Nokia has acquired Navteq, what about Maps for Pakistan, Khurram replied that it’s being worked upon as Nokia / Navteq is already covering 200 countries and Pakistan will soon be covered, no time line could be given as it is yet to be confidential.

It was my turn then and I asked if OVI is about openness – why not Nokia make their Map Makers like Google once did for Pakistan.  Khurram replied that OVI Maps API is just released, but I countered him by saying as a user I’ve no clue what to do with an API. Give me something like Google Map maker and I can mark my location to millions of others?  Khurram said they are working on it.

My second question was how Nokia sees Google as a competitor; both are eyeing the same market.  It’s OVI Maps vs Google Maps Mobile, Nokia Friend View vs Google Latitude with Google’s vast resources where Nokia sees itself?   Khurram’s answer was that OVI Maps are available offline while Google Maps need a data connection and the costs associated with it, however he admitted that some people say, Google copy them and in other words, they get inspiration from them ;)

Other questions were also asked but I was discussing things with Umair Mohsin of Tuesday.com.pk so was not able to get them.

Time to Peek into Nokia n97

Then Shabana Shahzad  talked while holding a Nokia n97, she covered the basics of the phone like battery life, standby time and specifications along with Touch screen demo including Personal Swipe option,  how to  run widgets on it and so on.

The people were not paying attention what she was saying; instead everyone was eyeing the phone desperately. Finally Shabana and Khurram handed out their devices to bloggers.

Both devices were exclusive in a sense for Pakistan – as Nokia will launch the exclusive Black Phone while the rest of the world will get the White phone that show’s Nokia’s commitment to the Pakistani market.

After passing a number of people the device came to my hand, I liked the slide motion, very swift flowing, the device was responsive, the camera worked fine. I also compared it with my iPhone 3G and found it to be thicker than that. 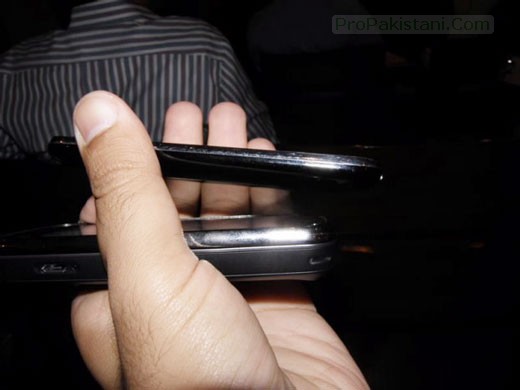 I didn’t want to leave the phone but gave it to Umair, as we were the last of the lot, we had no pressure to give it to the next person so took snaps checked out the devices, until we were forced o go for dinner.

The food was delicious, like the devices, Nokia does not compromise on food, Sushi, Teriyaki  and brown rice with other delicious Fish dishes and steak followed by drinks (Pepsi and Fresh Lime 7Up) and Ice Cream .

The evening ended around 9, but I stayed long, had some fruitful discussions about upcoming technologies and Nokia’s role in Pakistan with the Nokia people.

At around 10 I said my goodbyes got some hush hush information which I cannot share , jumped in my truck with my Nokia souvenirs an OVI branded paper holder and a 2 GB Nokia N-Series branded Kingston USB Stick thinking about the N97.