ProPakistani extensively covered all Facebook related developments that happened last week. We know Facebook is blocked in Pakistan due to blasphemous page, which has been repeatedly appearing and disappearing from Facebook. during this we have not seen any official stance or action from Facebook administration on this.

At this point of time, many minds are thinking about what is going to happen after May 31st, 2010? Will government of Pakistan continue the ban or not?

I am writing this post to speculate the situation (be informed, this information is based on speculations and conversation with experts, high-ups at PTA and Ministry)

Before that, let’s explore what people of this country are thinking over the ban. Luckily we have results from two ongoing polls, one conducted by ProPakistani and another was organized by Teeth Maestro. Following are the results:

Question: Do you Support Ban on Facebook in Pakistan? (Link to Poll: http://poll.fm/1x8xz)

Question: Are you accessing Facebook in Pakistan during the current ban? (Link to Poll: http://twtpoll.com/r/gai283) 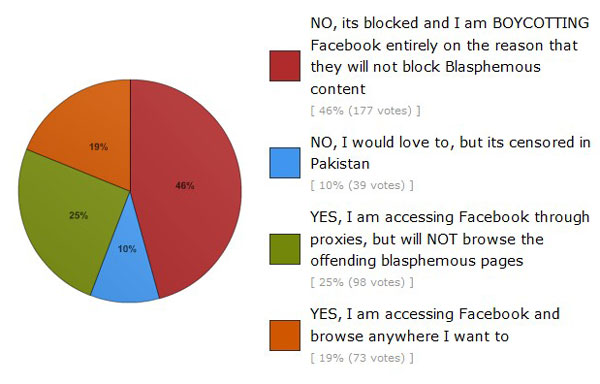 As per orders, PTA will update Lahore High Court regarding the situation on May 31st, 2010 after which it will decide to lift the ban or otherwise to continue with it.

Both the polls show that majority of internet users in the country are fine with the ban and they don’t have same kind of love for Facebook like before.

However, it is apparent that there are people who don’t support the ban – in fact they are against it as they translate it as internet censorship.

They said that Facebook has removed the page for now but there is no guarantee that it will remain offline as Facebook hasn’t said anything officially – so LHC’s mood on May 31st can’t be determined as of today.

They said that if page remains offline for another week then there are good chances that LHC will offload the ban.

High ups at PTA said that even if Facebook is unbanned, authority may not lift the ban from Youtube. They said Youtube was contacted number of times in the past, but they are too careless to comply with blasphemy act of the country.

Political corners opine that few elements may use the situation. They said that Government may keep Facebook banned until it will lift it at right time. They say government can use Facebook for political purposes as a tool to divert the attention of masses from NRO cases in Supreme Court.

If unbanned, majority of internet users in Pakistan won’t love the Facebook like they used to before this incident. A question mark on Facebook’s ability to manage religious matters is leaving many minds confused to either use it again or not.

Some bloggers and webmasters have already taken down Facebook widgets from their websites and may never use them again.

Emergence of local social network will be on the rise, for some time, until they will vanish away due to lack of technical and online marketing expertise.

However there is no doubt that this is best time for enterprises to invest in social networking solutions, but only if their applications are solid, robust, feature rich and competitive.