Today, Facebook has reached yet another milestone in its journey through the Land of Pure.

Facebook Pakistan now boasts more than 3 Million members from Pakistan and this is just the beginning. More than 200,000 members are being added to Facebook every month making it the medium of the communication on the internet for Pakistanis.

It was just a few months back when the future of Facebook seemed doomed for us. Government censures and religious zealots predicted the end of this “evil” from Pakistan’s cyberspace. 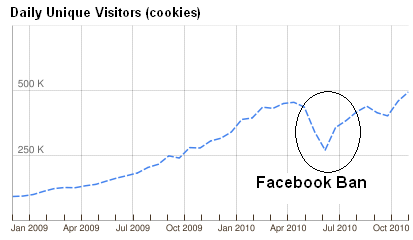 Copycats jumped up to this opportunity and announced their own versions of social networks claiming to topple the social media giant. However, Facebook survived all these attacks and despite a short period of mass withdrawal it continues to grow at an astronomical rate.

Currently, Facebook is adding more than 230,000 new members to its network from Pakistan every month. This is a 7.7% Month on Month growth for Facebook in Pakistan.

In comparison, Pakistan’s most hyped cellular sector added nearly 580,000 new subscribers to its 100 Million user base showing a 0.58% Month on Month growth. While Pakistan’s Cellular users are reaching a point of saturation, the Social Media has just started its journey.

Social Media may never take over Cellular networks but with a current user base of 3 Million talking mouths and growing at a phenomenal 7.7% rate, it is impossible to ignore anymore.

Note from Editor: ProPakistani doesn’t use Facebook for reasons mentioned here. Our writers may have their opinion different from ProPakistani’s policy, reflecting their own thoughts, experiences and ideologies.