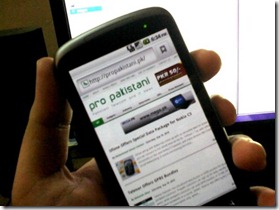 The significant increase in imports depicts the upward demand trend in the local markets to meet the consumers’ needs in the different cities including flood-hit areas.

The imports were also recorded 34 percent high in November 2010 as against October 2010, showing constant month over month growth.

Industry experts said the demand spike also translates into higher sales of the branded and Chinese-made Mobile handsets in the country.

The imports of Chinese-made handsets have maintained its growth in the local markets owing to its popularity among the the customers for low-cost and dual-SIM brands.

Zeeshan Quershi, Head of Samsung Mobile Pakistan, said the handsets imports were witnessed increasing on high demand of the customers in the local market particularly in flood-hit areas where millions of people had lost their handsets during July to August 2010.

He said the sales in the commercial and flood-hit areas have witnessed growth in the last couple of months.

Quershi explained that Pakistani market has been changed in the last couple of years as the matter of fact share of low-priced handset increased on the eroding purchasing power of the people.

This gadgets business witnessed shift towards low-priced handsets as it indicates 70 percent of the Pakistani market comprised off the buyers having purchasing power up to US $ 50 dollar.

Similarly, a significant number of customers buy handset ranged up to US$20 including cellular phone operators’ tagged gadgets.

The sales and purchase of mobile handsets witnessed growth on different reasons. Cellular phone users replace their old handsets with new to use latest technology. Mobile phones are bought when handsets stop functioning. Also, a large number of customers buy new gadgets repeatedly in the case their handsets are stolen at gunpoint.