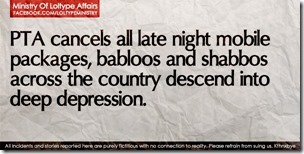 A Senate’s Standing Committee on Cabinet Division has asked Pakistan Telecommunication Authority to stop all night packages, offered by cellular companies for cheap hourly calls (usually at Rs. 1-3 per hour) or even free calls at a fixed nominal daily charge.

Cellular companies confirmed ProPakistani that they haven’t received any such directive from authority yet.

This is not the first time that voice against night-packages has been raised. Earlier, Punjab and KPK Provincial assemblies passed resolution for the ban of night packages, but nothing could stop cellular companies with their night-calls offerings.

Night Packages are argued to be spoiling the youth. Surveys have been conducted to back this argument. Night packages are alleged to be responsible for bad health and poor academic performance of the youth.

In a Poll Conducted by ProPakistani (back in 2010), 70 percent of respondents voted for the closure of night packages.