Election Commission of Pakistan has once again communicated to Cabinet Division and directed it to not to hire Member Finance and Member Technical due to imposed ban on all kinds of recruitments till further notification.

It merits mentioning here that Cabinet Division is in process of hiring Member Finance and Member Technical for Pakistan Telecommunication Authority, and in fact it had appointed Mr. Farooq Awan as Member Finance on deputation (temporarily appointment till the hiring of regular member), however, he was later de-notified amid pressure from LHC.

Cabinet Division, earlier, had requested ECP for relaxation of ban on new recruitments. However, ECP has now maintained its verdict and said that no new appointments should be made in any case.

ECP said that new appointments are especially not viable because of press reports suggesting that efforts are being made for such appointments to influence multi-billion dollar 3G auction.

It merits mentioning here that there is no member or the chairman present at PTA and all top slots are vacant. Reportedly, government was trying to fill such positions with its favourites, however, due to legal fight given by civil activist all such efforts are now halted.

Now, due to ban on new appointments by ECP, it is unclear that when members and Chairman of PTA will be appointed.

Having said this, Cabinet Division is apparently not listening to ECP. It is still making arrangements for the appointment of members, for which meetings of selection committee are being held. If any member is appointed, despite this directive from ECP, it is likely that move will be challenged in the court.

Telecom industry is greatly suffering due to this managerial conflict at PTA, as almost every task that involves regulator, is on the halt.

Following is the letter that was recently sent to PTA by ECP: 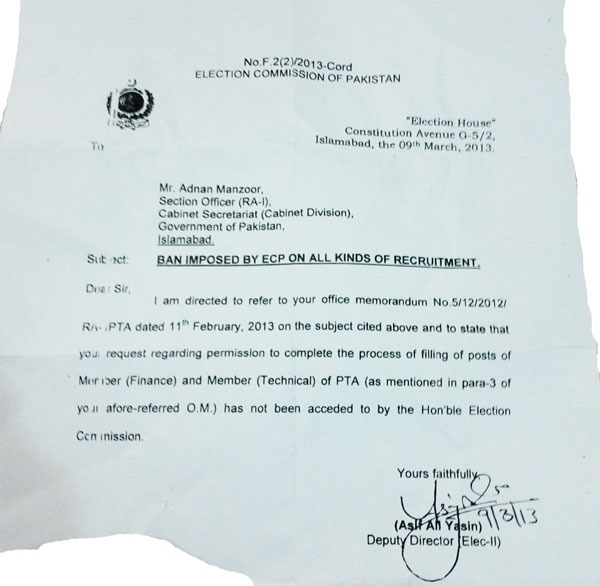