The day Pakistan decided to become an ally of America’s War on Terror, it became a prime target of terrorism itself. Since 2001, Pakistan was targeted by hundreds of terrorist attacks causing more than 40,000 civilian and security personals losing their lives.

Instead of recognizing Pakistan’s sacrifices in this war, now it’s known as Terrorist State in the world. We can’t be relaxed telling ourselves that this is not true and that it is just a propaganda against Pakistan. Lie or truth doesn’t matter in this world anymore; people buy what big Media houses sell — and this is what exactly is happening here.

Pakistan is an exporter of terrorism: this is a truth of today, largely known in the western world.

Clearly this is a major failure of our foreign policy but what is gone is gone, now we have to rethink and redesign our policies to improve the image of Pakistan in the outer world.

A short-term result driven policy should be to change the general perception about Pakistan in west. A foreign relations analyst can explain this in a much better way but in my opinion, as a marketer, the primary goal should be to reach out each and every individual living in these influential countries and show them the real face of Pakistan.

The peace loving people, foreign tourists’ accounts, talented students, and energetic youth. I will bring them all to YouTube to watch positive documentaries about Pakistan, directing them to web pages to learn sacrifices, losses and contribution in this so called War on Terror.

How would you do it on state level? You’ll probably task your embassies to build a very effective PR campaign, reach Newspapers and Magazines like New York Times, Wall Street Journal, and Times etc. You may want to run Ads on CNN, BBC and other major global TV channels.

This is a fine approach but what if Newspapers and TV channels refuse to run your message?

I believe traditional media won’t work in this case as they have their own interests and won’t be able to deliver our message to desired extent and even if they agree to run our PR campaigns, a country like Pakistan won’t be able to sustain because of huge budget required for such campaigns.

When you type “Pakistan is” in Google search, its instant feature shows relevant suggestions based on the searches of other people from around the globe.

When you type “Terrorist Groups”, there is a Pakistan in suggestion as well.

Google Keyword Tool tells us that there are approximately 50,000 people searching for a keyword “Terrorist Groups”.

Consequently, these search results — with plenty of negative stuff on Pakistan — are clicked and read by millions of internet users across the globe. And interestingly, we are letting this happen without a counter policy to defend our name.

Have a look at following search results: 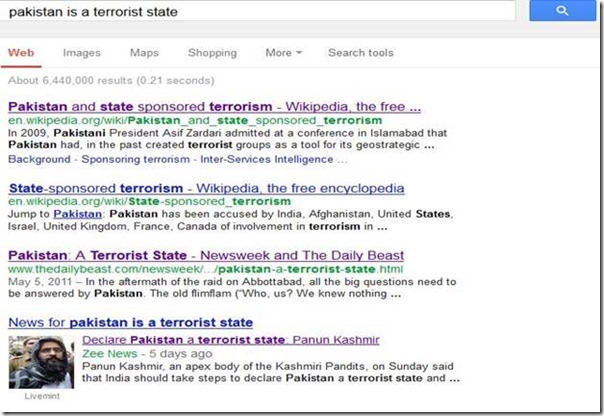 First thing that we can do is to bring some sites — with our own driven content and positive things about Pakistan — up on top in Google search results pages.

This is very much do-able and technique used to bring your own site up in search engines is called Search Engine Optimization (SEO). With the help of SEO, we can bring our own websites with positive image about Pakistan whenever anyone in this world searches for such keywords.

If you are regular internet user then you might have noticed third-party ads running on the websites you frequently visit and you may have noticed that  ads are relevant to the subject of the visiting website.

These are contextual ads — a way of displaying advertisements based on the content displayed to the user.

Using such contextual techniques we can target those websites where negative news about Pakistan appears. To do this, we’ll take help from Google once again — a major player in contextual advertising.

We can design ADs, specifically tailored for such website with negative content about Pakistan. If executed well, we can show our ad to those people who are reading anything related to Pakistan.

For example; image shown below shows an article written by Salman Rushdie.

We may not stop him to write anti-Pakistan articles and can’t force this website to stop publishing such articles but what we can do is simply run a positive ad on this website with strong message and intriguing the reader that Pakistan is not terrorist state and you should learn more about it by clicking this ad.

That ad should lead the visitor to well documented website where fact and figures with proves tell him the whole new story about Pakistan. The Ad spot you can see above the article with a text “Dare the World”. 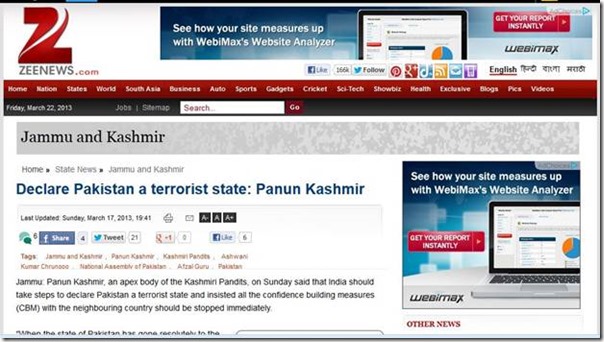 We can create communities on Social Media sites like Facebook and engage western citizen in healthy discussion about Pakistan’s role in War on Terror. Facebook ads can help us reach every single individual living in USA and other countries.

CNN reported a recent blast in Pakistan at the link below…

I am not showing here the original news story but what happens after such news reporting is important to learn for Pakistanis. 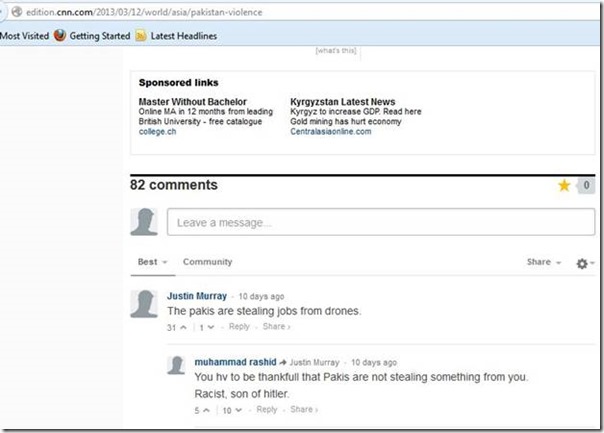 Just below the story you can see “Sponsored Links”. We can target them to show our message.

On a related note, just read the first comment posted by “Justin Murray”. Instead of being sorry for such sad news, he is making fun of Pakistanis and interestingly got 31 “Votes-Up” for his comment while a Pakistani who spoke in favor of Pakistan got 10 “Votes-Down” for his comment.

This tells us whole story about what is happening online and what people think about Pakistan. A lot of negative stuff floating on internet about Pakistan, call it conspiracy theories, propaganda or whatever you want to say but I have just one question; whatever it is, don’t we need a counter strategy?

This strategy requires state-level support or someone who loves Pakistan more than his money to support a team of Digital Marketers to successfully implement and run it. We can’t stop them to write negative but we can decrease its impact to significant level.

Imagine, all internet surfing US citizens viewing ads about Pakistan on regular basis all the time they search Google, visit particular websites, use Facebook, Go to YouTube etc. After some time these ads will start hitting their minds and they’ll definitely try to learn more.

Political Leadership, Army and ISI should think about it. You are spending billions to stop the enemy entering our border lines but did you know they have already crossed our eBoarder? Are you prepared for eWar? And do you have eSoliders? I wanted to write how our enemies penetrated into us using eStartegies and Social Media but I have already taken your lot of time so leaving it for now.

Writer is Founder & CEO at Digitalmization.com and passionate to write about Digital Marketing and its use in current era. You can follow him on Facebook and Twitter or read more of his posts on his Digital Marketing Blog.