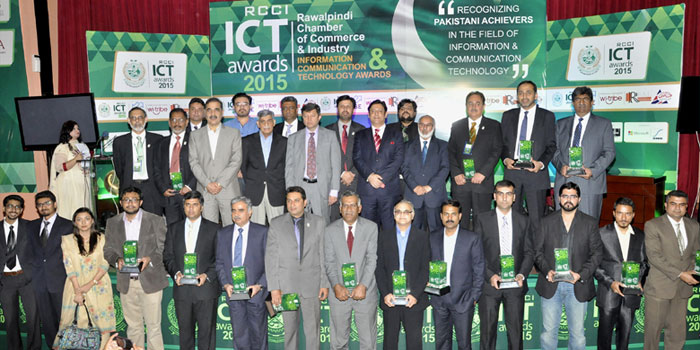 Chairman Pakistan Telecommunication Authority (PTA) Ismail Shah has said that government is working on introducing mobile banking and e-government applications in the country, which would have positive impact on the overall economy, besides providing improved telecom services to consumers.

Speaking as chief guest at the first RCCI-Information and Communication Technology (ICT) Awards 2015 distribution ceremony organised by Rawalpindi Chamber of Commerce and Industry (RCCI) here on Wednesday, he said that after the auction of next generation (3G/4G) in the country enormous improvement had been observed in telecom services. Telecom tele-density reached to about 80 percent, he added.

Chairman RCCI standing committee on ICT Raja Omer Iqbal said that Rawalpindi and Islamabad was the hub of ICT industry and that’s why RCCI took this initiative to promote the industry.

Ismail Shah said that it was the first ever effort by any Chamber to organise such event and Rawalpindi Chamber must be admired for this tremendous endeavor. He said that private sector should come forward for the promotion of ICT industry as there are huge investment opportunities for both local and foreign investors. He was of the view that ICT is the biggest industry of the future and it is need of the hour to create awareness among masses about the benefits of the industry.

In the awards ceremony 13 awards in different categories were given after the recommendation of a group of independent panelists.