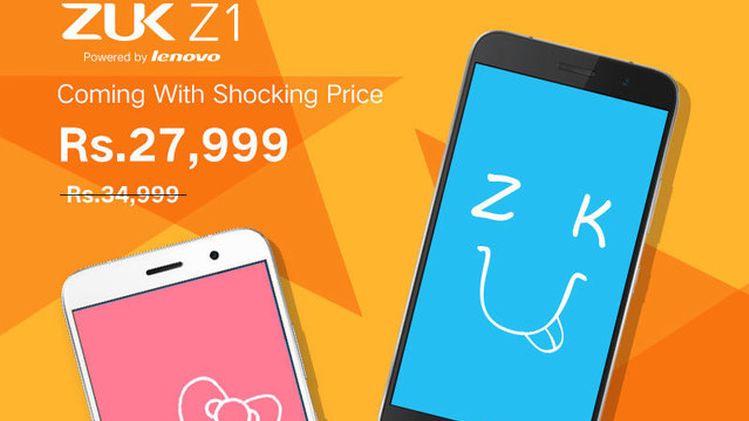 It hasn’t been long since Lenovo’s ZUK Z1 was launched in Pakistan. Z1 offers top of the line features and a premium build in the midrange segment. Luckily for those who are searching for a new phone which can offer supreme experience at a low cost, the ZUK Z1 is now selling at Rs 27,999. That’s Rs 7,000 off its normal price of Rs 34,999 and about the same as the phone’s international price.

The massive 20 percent discount makes the ZUK Z1, “the best” phone in this price segment. Other than the massive discount, its retailer, Cheezmall, is giving 12GBs of free Zong 4G internet. Whether you are a Zong subscriber or not, 6 months of free 4G internet is always good.

Despite what the price might indicate, the phone comes with a great 1080p 5.5-inch screen. The phone is built around a metal frame and matte plastic and is less than 9mm thin. Below the screen there’s a unique fingerprint scanner which doubles as a multipurpose button and you can perform multiple actions (back, home, task switcher) by tapping, pushing the button or simply swiping.

To remind you of the feature list boasted by the ZUK Z1, it comes with the Snapdragon 801, which, according to ZUK, offers reliable performance of the chipset, good performance and battery optimisations. There’s 3GB of RAM and massive 64GB of storage offered by the ZUK Z1. ZUK’s phone comes with dual-SIM and dual 4G support, something not often seen in dual-SIM smartphones. The phone supports all networks including Telenor’s new 4G band.

The camera department features Sony camera sensors. The rear one is a 13MP unit while the front one is an 8MP one. There’s a dual LED flash accompanying the rear camera.

There’s a huge 4,100 mAh battery in there too which should last you a couple of days of heavy use easily. Underneath the phone, there is a USB Type-C port which helps charge the phone quickly and makes data transfers much faster. A 5 minute charge is enough for 2 hours of calling on the Z1.

Finally, the phone runs Cyanogen OS 12.1 upgradeable to Cyanogen OS 13. Cyanogen offers the freedom and performance that none of the other phones can match, giving ZUK Z1 another advantage over its competitors.

With the discount and the free data in mind, Z1 is a great buy for anyone looking for a phone in this price segment. The phone can be bought from Cheezmall for Rs 27,999 here.