According to Times Higher Education World University rankings, no Pakistani university made it to the list of top 500 universities in the world.

These rankings are different from the previous university rankings we covered in the past, which were for the top 150 universities not older than 50 years, and Top Asian Universities in the world.

The Times Higher Rankings have one crucial difference that set them apart. They take a look at all the universities in the world. and are from the most reputed higher education ranking authority.

Two Pakistani universities made it into top 800 in the rankings. Quaid-e-Azam University (QAU) was ranked 501-600 while National University of Science and Technology (NUST) was ranked between 601-800.

The rankings are decided by evaluation of the universities according to key performance indicators. These indicators are divided into 5 major categories. These are teaching, research, citations, international outlook and industry income.

Pakistan’s education spending has not even exceeded 3% of its total GDP in the previous years, a woefully low amount for any country.

Take a look at government spending for education in the previous years here: 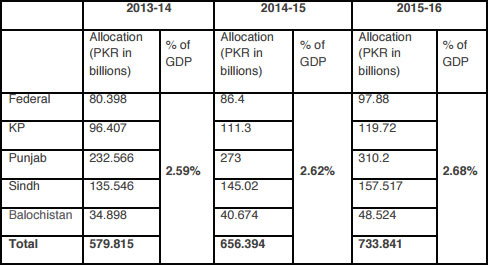 Given the spate of increasing reports against the falling standard of higher education in Pakistan, it is high time that the government took notice of the academic emergency here.

Of course its a problem that needs more than just throwing money at it. We need better professionals, and honest professionals at that. It is hoped that the concerned quarters should get into action before its too late.