Pakistan ranks among the countries with lowest internet penetration in the world, indicating that the recent internet uptake during past two years isn’t enough and a lot is still to be done.

Recent most ICT Facts and Figures (2016) released by International Telecommunication Union reveal that Pakistan — with some 18% internet users — is ranked alongside African countries for internet penetration.

Pakistan specific stats reveal that majority of internet users are connected with wireless broadband (3G and 4G) while fixed broadband (DSL, FTTH) still accounts for less than 3% of Pakistan’s population, as compared with 10-12 percent in fixed broadband globally.

ITU emphasized that a 53% of global population, especially in developing worlds, remains cut-off from internet. ITU said that this is happening regardless of the fact that prices for ICT services are falling in almost every market.

More detailed global map of internet penetration in the world is given below:

Seven billion people (95% of the global population) live in an area that is covered by a mobile-cellular network (2G at least).

Mobile-broadband networks (3G or above) reach 84% of the global population but only 67% of the rural population.

Globally, the total number of mobile-broadband subscriptions is expected to reach 3.6 billion by end 2016, compared with 3.2 billion at end 2015.

Global fixed-broadband subscriptions are expected to reach around 12 per 100 inhabitants in 2016, with Europe, the Americas and the Commonwealth of Independent States regions having the highest rates of penetration.

Strong growth in China is driving fixed-broadband in Asia and the Pacific, where penetration is expected to surpass 10% by end of 2016.

By the end of 2015, 83 developing countries — including Pakistan — had achieved the Broadband Commission’s affordability target.

By the end of 2016, more than half of the world’s population – 3.9 billion people – will not yet be using the Internet.

While almost one billion households in the world now have Internet access (of which 230 million are in China, 60 million in India and 20 million in the world’s 48 Least Developed Countries), figures for household access reveal the extent of the digital divide, with 84% of households connected in Europe, compared with 15.4% in the African region.

Internet penetration rates are higher for men than for women in all regions of the world. 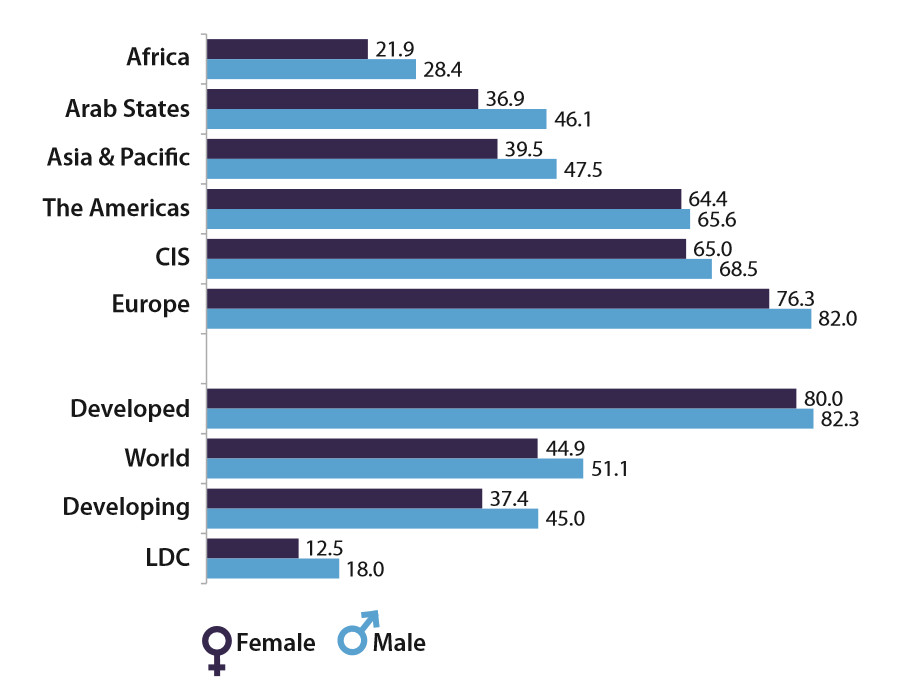 However, bandwidth is unequally distributed globally, and lack of bandwidth remains a major bottleneck to improved Internet connectivity in many developing and Least Developed Countries.

You can go to this link to download ITU’s ICT Facts and Figures for 2016, that were released earlier today.