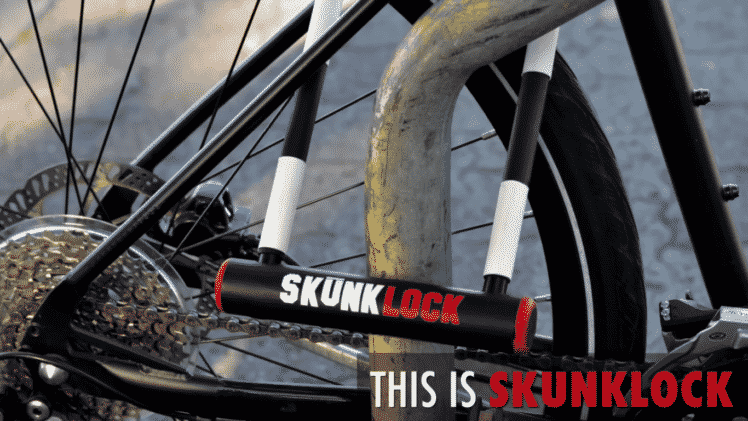 Ever had your shiny bicycle or bike stolen?

Bike and car thefts are common in Pakistan, especially in major urban cities like Karachi. On average about Rs. 5 billion worth of cars are stolen every year. Karachi, Islamabad and Rawalpindi are where most of the thefts occur with an average of 21,000 cars stolen each year alone.

In future, however, you won’t have to worry about your bikes or bicycles getting stolen, if this nifty little gadget called the “Skunk Bike Lock” becomes a reality.

Read More: Rs. 5 Billion Worth of Cars are Stolen Every Year, Here’s How You Can Save Yours

Locks preventing thefts for bicycles are easily breakable. You can get a simple hairpin to pry open your average lock. Alternatively in western countries, bike thieves use electric saws to cut away the metal locks that secure them.

The problem is that bicycle theft cannot be completely prevented even with the best kind of locks out there. Its only a matter of second for a thief to cut through a metal lock.

A frustrated bicycle owner shared his story with a friend, who came up with an idea for a lock. Daniel Idzkowski has come up with a new bike lock called “Skunklock”.

What happens is that if you try to cut open the lock, when you cut about 30% of it, a mixture of gasses is released from the cutting point. The gasses cause uncontrollable vomiting for the culprit. The mixture is not completely a gas, but it sticks to your face and clothes when released. Its very hard to wash it off and will cause you to continue vomiting as long as its on you.

The lock can work for motorbikes and scooters as well.

Daniel admitted that its not completely fool proof. You can just wear a gas mask to open it. You can also just get a lockpick and pry open the locking mechanism instead of cutting the lock.

That being said, it still prevents your average bicycle thief from stealing it.

You can’t prevent a theft 100%, so that’s why we call it a deterrent lock, not a solution. All you have to do is be better than the bike across the street.

The Skunklock has surpassed its Indiegogo goal of $20,000. You can head over to their Indiegogo page for more details. For now a backer needs to pledge $99 to get a Skunklock by June 2017.