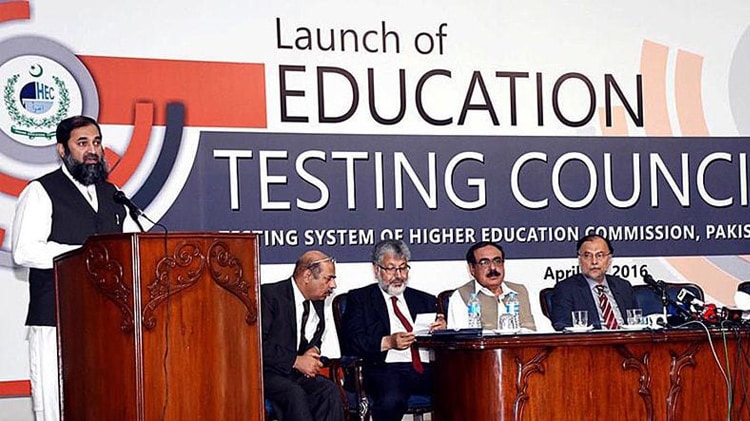 Not long ago, a Cabinet Committee of National Assembly declared the National Testing Service (NTS) as a ‘big fraud’ and stated that the organization is being run by a mafia.

The feud forced the Higher Education Commission (HEC) to address the situation and form a standardized testing service which was approved unanimously.

As promised last year, the HEC has now officially launched the Education Testing Council (ETC). It will comprise of four vice chancellors from public sector universities, two vice chancellors from private sector universities, two officers of the HEC, two members of the civil or corporate society among other officials. Together, they will be managing the council.

The ETC will be responsible for conducting tests and examinations in a standardized and a transparent manner. According to the HEC, the council will be an independent, professional and a resourceful setup.

The Chairman HEC had previoously stated that tests would be conducted for undergraduate admissions only, followed subsequently by MS, PhD admissions, and scholarships .The tests would be valid for a period of two years. He had announced that the government will bear the cost of this test, which will be held twice a year.

All public and private universities of the country will be adopting ETC entry tests for admissions, Chairman HEC claims.

The council will focus primarily on conducting valid and reliable tests for entrance exams. These exams will not only be for the admissions to academic programs in higher education institutes of Pakistan but also for scholarships.

The exams will also help applicants in attaining employment in HEC and other national and international agencies.

The chairman of the HEC is said to have complete authority over the ETC. The notification letter also read:

The terms of reference and rules & regulations for ETC’s operations will be finalized six months from now, according to the HEC.