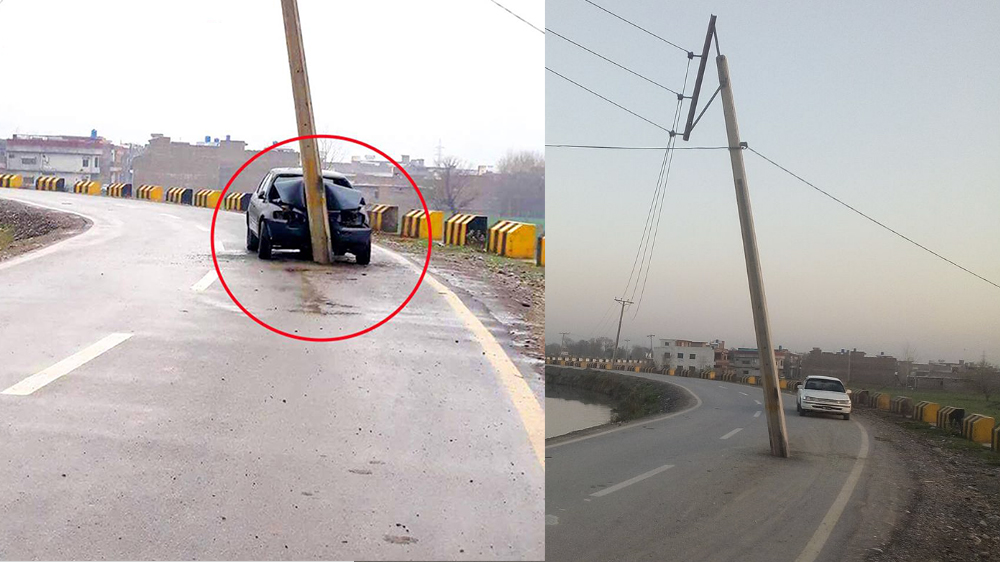 There’s stupid and then there’s a special kind of stupid.

A few days ago, this picture of a crashed car went viral over social media:

An accident on Warsak Road Peshawar 2 days back (picture) . One of my second cousins nearly missed it. Whoever made this road with a pillar at this place — may he rot in hell 😡 pic.twitter.com/N8zt62xw3m

These electrical poles serve a very vital function in Pakistani society. They just mind their own business, unlike most people we know.

In fact, even in most areas of the country that only have electricity for a few hours of the day, they at least keep the high-tension wires away from folks who just want to go about their lives (and not get a rude shock in the process, literally speaking).

Where Can You Find This Marvel?

Now coming back to the subject in the picture above, this engineering marvel of a pole is situated in Peshawar. More specifically, it is situated at Sabzali town (back side), Warsak Road, Peshawar.

It seems like this pole has seen its fair share of action by virtue of being deployed in the wrong place at the wrong time.

But what if someone told you, that this pole wasn’t the only one to lean on like a Michael Jackson dance move? As per eyewitness accounts, there are two poles like this – on the same road!

Here are pictures of the exact same site, taken today (6th March 2018) — from different angles – including closeup of the shattered glass from the accident shown above!
I have even more pics of the site, & other such poles on the road. Also see the video in the tweet below! pic.twitter.com/5euHlejMhc

But wait a minute. We live in a world of fake news and a nifty lil program called Photoshop. How are we supposed to judge a random picture doing the rounds on the internet?

As it happens, someone just went and confirmed that this Leaning Tower of Peshawar is indeed as legitimate as it gets:

And here is the video taken and narrated by my cousin (in Pashto) — showing not just one but many such stupid poles on this road. The last pole shown in the video below is where the accident shown above happened. Please do something about this , before it takes any lives! pic.twitter.com/vkQfD0qQVY

We bet even Vin Diesel (of the Fast and the Furious Fame) could not survive this death-defying corner of a road, ably supported by that wrongly placed pole in the middle of the turn.

Now for the questions that are on everyone’s minds? Who is responsible for this monstrosity and why is nothing being done about this stationary death trap in what appears to be a rather dangerous and narrow road.

People, kindly take note that this Pole is a property of PESCO and it comes under Federal Government ! #Peshawar https://t.co/ggw7QoXbKM

One intrepid tweeter mentions that this is the property of the Peshawar Electric Supply Company. Since reports say that the pole was laid into the newly constructed road later on, the electricity distribution company is solely to blame in this case.

Jokes aside, this matter needs to be resolved at the earliest. The pole has already caused a few accidents and injuries ever since it was installed. The authorities in question need to make up for this snafu before some precious lives are lost due to this. Like we mentioned in the beginning, there’s carelessness, and then there’s stupid ignorance. The installation of this electric pole seems to be a bit of both.