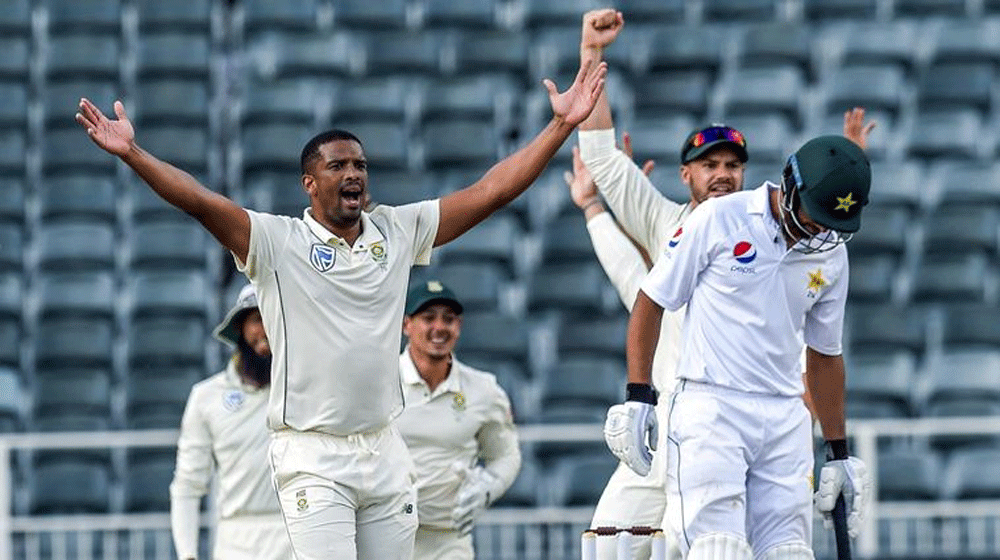 Tail-enders’ resistance has come to an end as South Africa folded Pakistan for 273 on the fourth day to register a 107-run win in the third and final Test.

With this emphatic victory, the hosts completed a 3-0 whitewash over Pakistan to leapfrog England and New Zealand to the second position in the ICC Test Team Rankings.

The worst possible defeat has also translated a decline in Pakistan’s Test rankings. They now slip to 7th, a spot behind Sri Lanka with 88 points.

BREAKING: With a 3-0 series win, South Africa leapfrog England and New Zealand into second in the @MRFWorldwide Test Team Rankings!

Pakistan slide one place below Sri Lanka into seventh.

When the Green Caps resumed batting with 153/3 on the board, they still required another 228 runs to avoid the looming whitewash.

With Asad Shafiq and Babar Azam on the crease, many cricket fans hoped for resilience from them. However, Azam did not take long and gave away his wicket in the third over of the morning. He scored 21 runs.

Next batsman in, skipper Sarfaraz Ahmed came and went without disturbing the scorers. The most successful bowler for South Africa, Dunne Olivier made both scalps.

Asad Shafiq (65) also did not last long and edged an away-going ball towards the second slip where Dean Elgar caught him comfortably.

Earlier, South Africa opted to bat first on a relatively better pitch and posted 263 on board thanks to Aiden Markram’s 90.

Pakistan in response were wrapped up for just 185, losing last five wickets for only 16 runs- another batting collapse that has now become a regular feature for Pakistan.

Sarfaraz Ahmed (50) and Babar Azam (49) were the only top-scorers for the visiting side, whereas Imam-ul-Haq scored 43 on top. Six Pakistani batsmen could not enter the double figures while four of them didn’t even open their account.

Pakistani bowlers, for the most part of South Africa’s second innings, were right on the money and got some early wickets as well. But, a heroic hundred from Quinton de Kock and a brilliant 71 from Hashim Amla saw Proteas through the tough times. They ended up posting a mammoth 381-run target for Pakistan.

Before this, Pakistan lost first and second Tests of the series by a margin of 6 and 9 wickets respectively.

Before coming to South Africa, Pakistan was counting big on its senior players like Azhar Ali, Asad Shafiq and Sarfraz Ahmed. Almost all of them failed Pakistan.