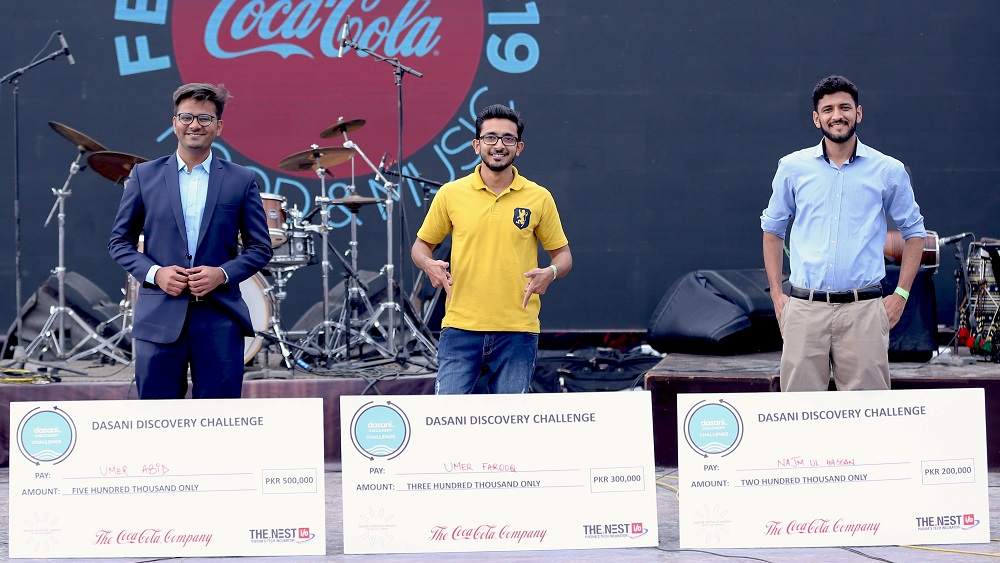 Umer Abid and his team have won a prize of Rs. 0.5 million for proposing an idea using plastic waste as a road-building material in the Dasani Discovery Challenge, organized by Coca Cola.

The competition was launched in November last year at the 021DISRUPT event of The Nest I/O. Overall, 73 entries were received, which were evaluated by a panel of 3 eminent judges, who shortlisted 12 entries. These shortlisted participants were then invited to show detailed presentations to the judges, based on which the final 3 winners were selected, all of whom happened to be from Karachi.

The second prize of Rs. 300,000 went to Umer Farooq and his team, who proposed manufacturing of building blocks, paver blocks, roof tiles, park benches, and other items using plastic waste. The winner of the third prize of Rs. 200,000 was Najmul Hassan whose idea was to create an architectural solution by using PET bottles as building blocks. The closing ceremony of Dasani Discovery Challenge took place on the Lahore edition of Cokefest, where more than 40,000 people were present.

Speaking about this competition, Rizwan U. Khan, General Manager of Coca-Cola Pakistan said,

The idea of organizing this open competition originated from The Coca-Cola Company’s concern with the global crisis of plastic waste management. In this regard, the Company launched its product packaging policy, ‘World Without Waste’ on January 19, 2018, where the Company will lead the industry in a bold, ambitious goal to help bring back by 2030 a bottle or can for every one that it sells. The goal is to make recycling more accessible to achieve 100% collection and recycling by 2030, creating public awareness about what, how, and where to recycle, with continued focus on making our packaging 100% recyclable.

One of the judges, Nazifa Butt of WWF-Pakistan, stated that it was very encouraging to see great interest being shown in the competition by mostly young people from all over the country, which proves that the youth is quite aware of the growing threat to our future caused by plastic waste, and is ready to try and come up with solutions to mitigate this threat.

She further said that other companies and brands should also come forward like Dasani to generate further public awareness and interest for this key issue.