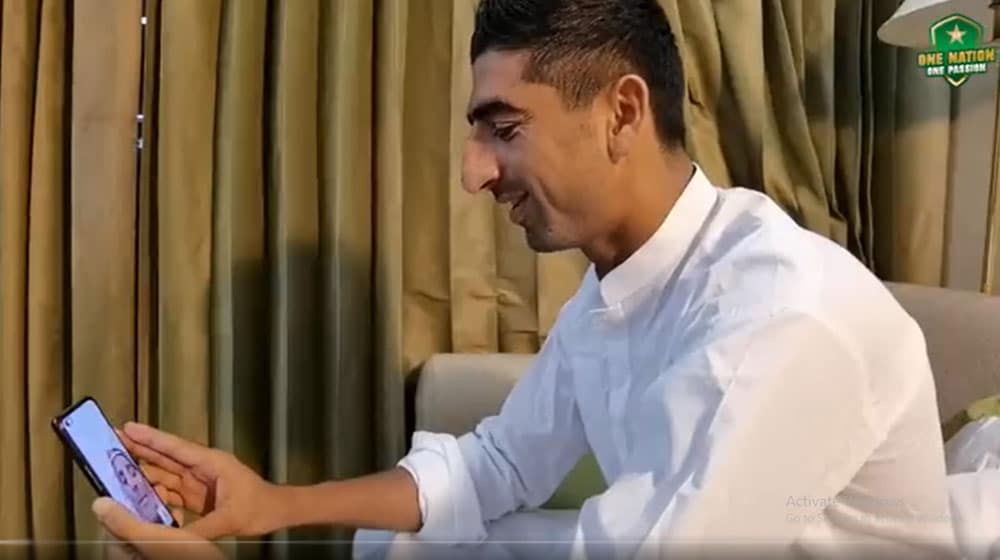 Pakistan fast bowler, Shahnawaz Dahani, on Monday, became the first cricketer from Larkana to make an international debut for Pakistan.

He received his debut cap from the former Pakistan captain, Sarfaraz Ahmed.

Representing Pakistan in the third T20I against Bangladesh, Dahani took his maiden international wicket in his first over. He clean bowled Najmul Hossain Shanto on the very next ball after conceding a boundary.

Earlier in the day, the fast bowler requested his mother to pray for him in an emotional video call.

In a video shared by the Pakistan Cricket Board (PCB) on Twitter, Dahani can be seen telling his mother that he would be making his T20I debut, asking his mother to keep him in prayers.

“I will watch you bowl today, and will pray for your success,” his mother told him, adding that she would pray for Pakistan’s victory.

In the same video, Dahani told PCB’s media team that he was very excited about his debut and that the excitement kept him awake all night.

“I am so excited that I cannot express my feelings. I was unable to sleep last night due to the happiness,” he added.

The fast bowler said it was like a ‘dreaming coming true.’

“I had two wishes; one that I could debut in front of my parents [live], but unfortunately, we are in Bangladesh and they are not here. Secondly, I also wanted to play my debut match in front of my people in Sindh,” he added.

Dahani said that he belongs to a small village located near Larkana, where he started playing tape ball cricket as a child.

“I was extremely passionate about playing cricket. I pursued this passion and never looked back,” he added.

He said that he was indebted to the people of his city for showing love and support for him after he became the highest wicket-taker in the previous edition of the PSL.

“The way they welcomed me when I returned to Larkana, I cannot describe it for you. They must also be really happy that a cricketer from Larkana is making his debut for Pakistan today.”

Dahani vowed to repeat his performances and give his best in his debut match.

“Insha’Allah, I will give my 100% in the match. The results, however, are in Allah Mian’s hands,” he added.