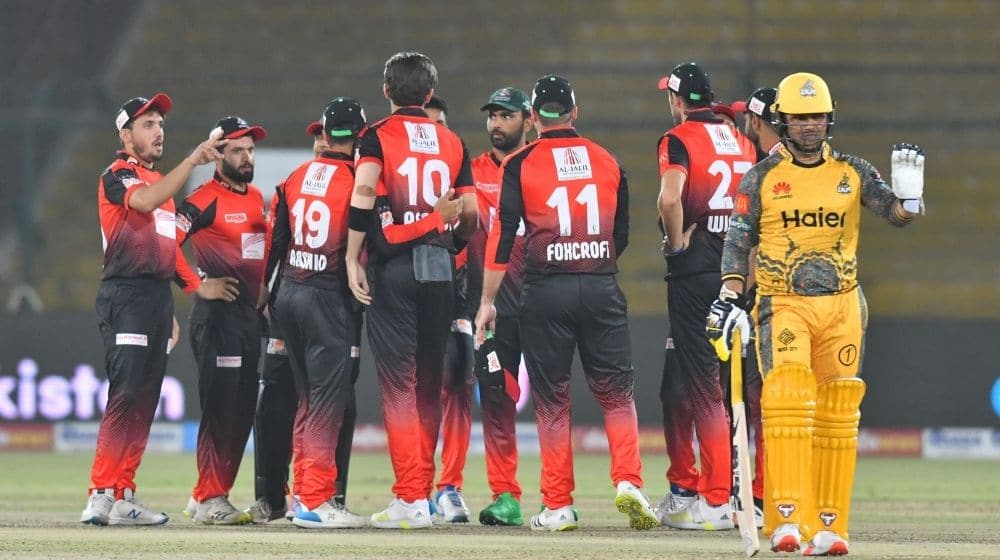 Lahore Qalandars moved to the second spot in the PSL points table as they convincingly defeated Peshawar Zalmi by 29 runs in the ninth match of PSL 7. Peshawar on the other hand stayed on the fifth spot after their second consecutive loss in the tournament.

Lahore opener Fakhar Zaman continued where he left off in the last match as he struck yet another half-century in the tournament. Fakhar became the highest run-scorer in the tournament as he smashed 66 runs off 38 balls while opener Abdullah Shafique offered him support in an opening partnership of 94 runs. Mohammad Hafeez and Rashid Khan lit up the National Stadium Karachi at the backend of the innings with some quick-fire runs. Lahore finished with 199/4 at the end of their innings.

Peshawar got off to the worst possible start as they lost opener Hazratullah Zazai on the third ball of the innings. They failed to recover as they lost wickets at regular intervals throughout their innings. Lahore’s world-class bowling attack bowled brilliantly as they managed to defend their target comfortably. Lahore won the match by 29 runs.

Lahore’s young speedster Zaman Khan was named as the player of the match for his excellent performance. He picked up 3 crucial wickets and conceded 32 runs in his 4 overs.

Peshawar Zalmi will face Lahore Qalandars in the ninth match of the PSL 2022 on Wednesday, 2 February. The match, scheduled at Karachi’s National Stadium, will start at 7:30 pm PST.

Peshawar Zalmi and Lahore Qalandars will face off against each other in a high-octane clash at the National Stadium Karachi. Both the teams will be determined to get a win and continue their ascension on the PSL 2022 points table. Both Peshawar and Lahore have won one and lost one match in PSL 7 so far and a win for either team will take them to the second spot on the points table. Currently, Zalmi are at the fifth spot while Qalandars are one position ahead of them at fourth.

Lahore lost their first match in the competition against Multan Sultans before making an amazing comeback in their second match against arch-rivals Karachi Kings. Fakhar Zaman was the man of the match for Qalandars as he smashed a marvelous century, first in this season’s PSL. Solid contributions from their world-class bowling unit provided them with a much-needed confidence boost and Lahore look set to take the league by storm.

Zalmi, on the other hand, have looked a shadow of their former selves. They were outplayed by Islamabad United in their previous encounter but the arrival of their international superstars will offer them a much-needed lift as they look to qualify for their seventh consecutive PSL play-offs. Afghanistan opener, Hazratullah Zazai is fit again and available for selection for the upcoming encounter while the likes of Saqib Mahmood and Lia Livingstone will join the squad in the next few days.

Peshawar are expected to make a few changes to their squad with Hazratullah Zazai, Arshad Iqbal, and Mohammad Umar making their way into the squad at the expense of Yasir Khan, Sohail Khan, and Pat Brown.

Lahore are likely to name an unchanged XI.

Overall, the two sides have come face to face 13 times in the tournament. Zalmi have an upper hand as they have won 8 while Qalandars have won 5. They last faced each other on 10 June 2021 in Abu Dhabi which Lahore won by 10 runs

Fakhar Zaman has been in sublime form for Lahore Qalandars in the opening two matches. Zaman scored a brilliant half-century in the first match and he followed it up with a magnificent century in their previous outing. Zaman’s rich vein of form at the top of the order will be crucial once again for Lahore as they look to score heavily once again. While Lahore’s bowling will restrict the opposition batting unit on most days, it is Lahore’s batting that will help them to win most matches this time around.

Usman Qadir has been decent for Zalmi so far in the campaign but the team management will be hoping that he provides them with much more. Qadir is an exceptional talent and he has the ability to trouble the Lahore batting unit and get them out cheaply. Qadir’s go-to delivery, googly, will play an important part tonight.