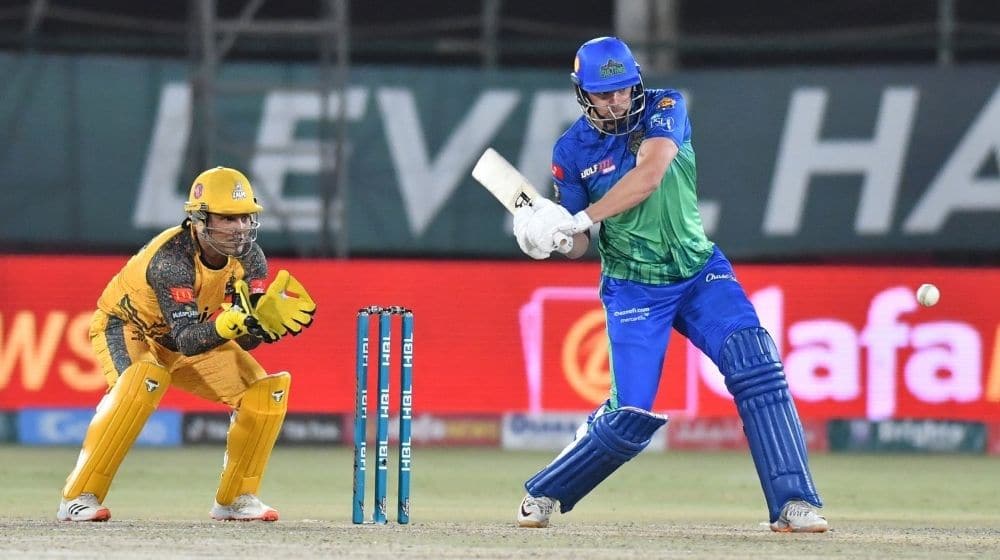 Multan Sultans steam-rolled past Peshawar Zalmi as they registered their fifth consecutive victory in the competition. Multan extended their lead at the top of the PSL points table and look set to become the first team to qualify for the PSL 7 playoffs. Peshawar, on the other hand, have maintained their fourth spot in the table for now but their net run rate took a major blow which might come into play later on in the tournament.

Multan continued where they left off in the previous match. Mohammad Rizwan scored yet another brilliant half-century and Tim David blasted the joint-fastest half-century this season as they dismantled the opposition bowling unit. A late blitz from Khushdil Shah took their total to 222/3.

Peshawar never got going with the bat and none of their batters took control of the innings. They failed to score at a high rate and lost wickets at regular intervals. Multan’s bowlers were exceptional and did not give any freebies to Zalmi batters to capitalize on. Dahani and Imran Tahir were top-class as they restricted Peshawar to 165/8. Multan won the match by 57 runs.

Mohammad Rizwan was named as the player of the match for his outstanding knock of 82 runs off 53 balls. He also took three catches behind the stumps.

Peshawar Zalmi will face Multan Sultans in the 13th match of the PSL 2022 on Saturday, 5 February. The match, scheduled at Karachi’s National Stadium, will start at 7:30 pm PKT.

Peshawar Zalmi will be determined to get back-to-back wins and become the first team this season to defeat the defending champions, Multan Sultans. A win for Zalmi will take them to the third spot while Multan has an opportunity to continue their winning streak and extend their lead at the top of the PSL points table.

Peshawar had a terrific outing in their previous encounter in the competition against Karachi Kings. They registered their second win in the tournament and leap-frogged Quetta Gladiators to move to the fourth spot in the table. They will be hoping for a similar performance in their match against Multan Sultans and build a solid foundation for them to build on throughout the rest of the competition. With the arrival of star players Saqib Mahmood and Liam Livingstone imminent, Zalmi can become a force to be reckoned with in PSL 7 once again.

Multan look head and shoulders above the rest of the teams in the competition so far. Under the leadership of Mohammad Rizwan, Multan have been near perfect in all departments of the game and are the only team in the tournament to have a perfect record so far. Multan’s think-tank will be looking to reintegrate Shahnawaz Dahani and Imran Khan Snr. back into an already firing line-up.

Peshawar are likely to name an unchanged XI from their last night’s encounter against Karachi Kings while Multan are expected to make one change to their line-up with Shahnawaz Dahani coming in place of Anwar Ali.

Overall, the two sides have come face to face 9 times in the tournament. Sultans have an upper hand as they have won 6 while Zalmi have won 3. They last faced each other on 24 June 2021 in the final of PSL 6 at Abu Dhabi. Multan emerged victorious by 47 runs and lifted their first PSL title.

Haider Ali has so far been below his usual best and his form has been a point of concern for Zalmi. Haider’s lack of form has not enabled Zalmi to score heavily in batting-friendly conditions and they will be hoping that Haider can quickly get back to his best and help out the rest of the batting unit.

While Multan have been marvelous in all three departments, they do however miss the services of Shahnawaz Dahani who was influential in their title-winning campaign the previous season. If Dahani gets back to his best then there is little chance for opposition batters to score heavily against this Multan bowling attack. Dahani himself will be determined to get back into form and stake his claim in Pakistan’s national T20 team.