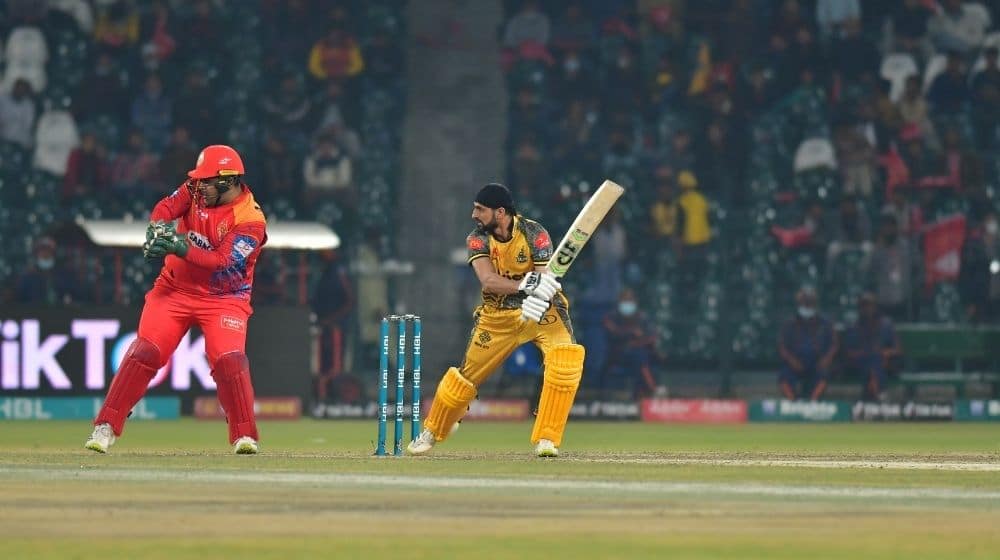 Islamabad United booked their place in the second eliminator as they defeated Peshawar Zalmi by 5 wickets in the high-pulsating encounter at Gaddafi Stadium, Lahore.

Peshawar got off to a slow start as Islamabad’s bowling unit restricted the run flow. Wicket-keeper batter Kamran Akmal took on the charge as he scored a brilliant half-century before Shoaib Malik continued the run flow with yet another half-century to his name. Hussain Talat provided the impetus at the death as Zalmi posted 169/5.

Islamabad got off to a formidable start as the returning Alex Hales took on the Zalmi bowling unit. Shadab Khan, Azam Khan and Faheem Ashraf contributed with cameos with the bat while Liam Dawson wrapped up the win with a six and boundary in the last over.

Faheem Ashraf was named as the player of the match for his brilliant all-round display. He finished with figures of 1/15 in 3 overs and scored 19* runs off 13 balls to take Islamabad home.

Peshawar Zalmi will face-off against Islamabad United in the 1st eliminator of Pakistan Super League (PSL) 7. The two teams will battle it out against each other at the Gaddafi Stadium, Lahore at 7:30 pm PKT on Thursday, 24 February.

Peshawar Zalmi will face a rejuvenated Islamabad United in a high-octane clash at Gaddafi Stadium tonight. Both the teams will be vying for the spot in the second eliminator where they will face Lahore Qalandars to get a spot in the final of the tournament.

Zalmi continued their winning momentum in their last match as they defeated Lahore Qalandars in the super over. They are on a 4 game winning run and will be determined to continue their fine form in the all-important clash. Zalmi have had some troubles with their squad as a few players have been ruled out due to COVID-19 but they still have a strong combination to trouble Islamabad.

United received the good news of Shadab Khan’s return to fitness and Alex Hales rejoining the squad for the play-offs. They have been in a terrible run ever since their top players were ruled out due to various reasons and they will be hoping that the return of their star players will spur them on and turn around their fortunes.

Peshawar are likely to name an unchanged XI while Islamabad are likely to make a number of changes with Shadab, Hales, Faheem Ashraf, Hasan Ali all coming back and Will Jacks getting his debut.

Overall, the two teams have come face to face 17 times in the tournament. Zalmi have an upper hand with 9 wins while United have won 8. They last faced each other in PSL 7 on 17 February 2022 at Gaddafi Stadium, Lahore which Peshawar won by 10 runs.

Wahab Riaz’s return to form has been one of the main positives for Zalmi over the past few matches. Wahab himself will be in high confidence as he bowled a brilliant super over against Lahore in his previous outing. Zalmi will be hopeful that their captain can lead from the front and put in another superb performance.

Islamabad will be ecstatic with the return of their leader Shadab Khan. Shadab was the prime candidate for the player of the tournament award prior to his injury and his contribution in all three departments for Islamabad was crucial in their early success. United will be hoping that Shadab can continue where he left off and spur them on to a victory.