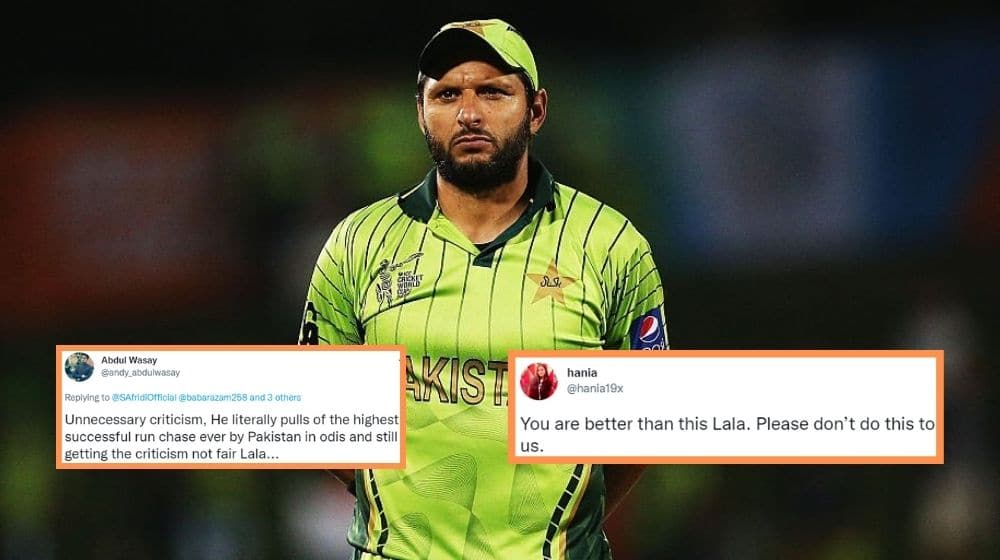 Pakistan’s all-format captain, Babar Azam scored a magnificent century as he led his side to a historic run-chase against Australia in the second ODI. Babar’s sensational knock of 114 off 83 balls set up the perfect platform for the incoming batters to finish off the innings and register Pakistan’s highest run chase in ODI cricket.

While Babar earned plaudits from the cricketing fraternity around the world and bagged the player of the match award, Shahid Afridi was not impressed with Babar losing his wicket at a crucial stage of the game. Afridi took to Twitter to express his views on Babar’s innings.

Afridi praised the amazing win by Pakistan but stated that Babar lost his tempo, adding that he should step up as a match-winner. He went on to praise the match-winning performances of Imam-ul-Haq, Shaheen Afridi, and Khushdil Shah

Amazing WIN🇵🇰!Good start by @babarazam258 but lost his tempo, waiting for him to step up as a match winner. Regardless, great overall performances by @KhushdilShah_ @ImamUlHaq12 @iShaheenAfridi
You made us proud
Keep it up boys ✨ 💚

The tweet did not sit well with the Pakistan cricket fans as they schooled Afridi for his criticism of the star batter. The cricketing fraternity reminded Afridi of Babar’s exceptional strike rate throughout the innings and stated that setting up a perfect run-chase and finishing off the match are two separate things.

Here are some of the reactions:

It's that time of the day again.. pic.twitter.com/qdy8k4r39y

Imagine playing one of the best knocks of Odis, scoring a century, getting potm award only to listen 'lost his tempo, waiting for him to step up as a match winner'? 🙂 he came on 118 and got out on 309. If he has to do everything, what's the purpose of whole team then?

lost his tempo? he literally scored 114 (83) at a SR of 137..if that wasn’t a matchwinning innings, I haven’t seen one in my life..distasteful tweet. pic.twitter.com/T5sJpbf3w2

Look at this analysis. This fellow played two decades of international cricket. https://t.co/jJ92mDHoPQ

I get wanting to push people further but there are times for criticism and times for praise. This innings deserved nothing but praise. https://t.co/E8oImtKTAT

Lost him tempo?
Waiting for him to step up as a match winner 😳😮 https://t.co/IzC2V4NLNW

#Disgusting Statement about this Masterclass of #BabarAzam
Seriously 'Lost his Tempo?
Babar came to bat when Pak need 231 of 187,and left when 40 of 35 appreciate nhi kr skte shahid bhai to degrade bhi na kre plz it was hell of an innings he made it with so ease @SAfridiOfficial https://t.co/15VLHwrHSn

“Lost his tempo” if after playing 114 match winning and setting knock is still a lost tempo then we don’t need a tempo. https://t.co/qhvaQoo9b7

Was he watching the same match as me? If 114 is not a match-winning performance then I don't know what is. Unnecessary criticism.#BabarAzam𓃵 #PAKvsAUS https://t.co/aBP2Jzjt7N