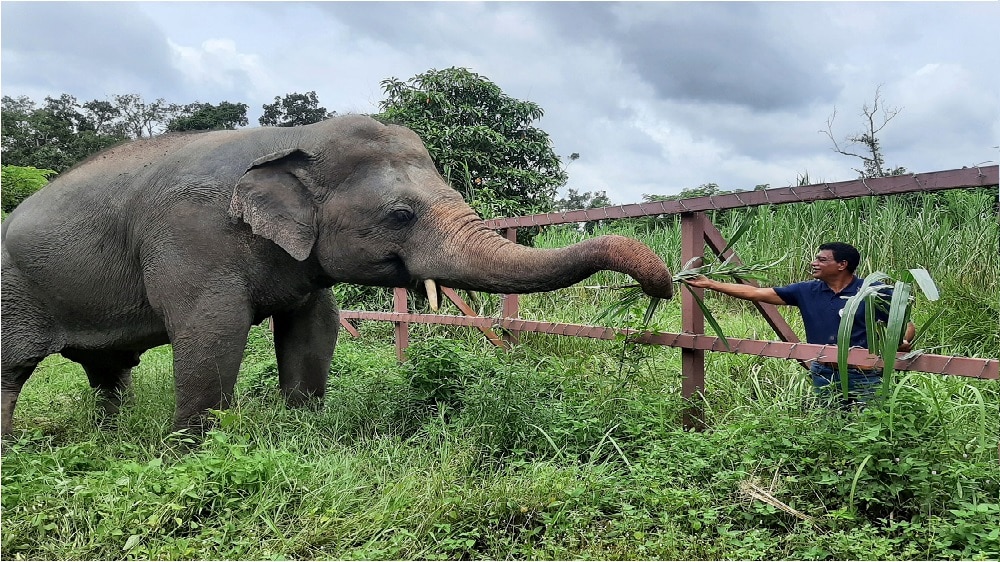 After having led Four PAWS ‘heaviest’ animal rescue mission for the 38-year-old elephant from Islamabad’s Marghazar Zoo and relocating him to Cambodia Wildlife Sanctuary for elephants in December 2020, he was curious to know if Kaavan would recognize him after two years.

“When I entered the Cambodia Wildlife Sanctuary, my heart was jumping, wondering if he would remember me, if he would be angry with me for having left him. Would he be happy to see me?” he recalled.

Kaavan appeared to look his former doctor straight in the eye and raised his trunk, as if to greet Dr. Khalil.

The vet started singing a song that he hoped Kaavan would remember – My Way by Frank Sinatra, which was the song that had made headlines about how they had first bonded in Islamabad Zoo in 2020. It was also the last song the Four PAWS head vet had sung before he had last said goodbye.

Kaavan’s rescue operation had been a mammoth task, pun intended. The Four PAWS International team had worked around the clock at Islamabad’s Marghazar Zoo in 2020 after an executive invitation following a ruling by the Islamabad High Court. In April 2020, the court had recognized that animals have legal rights and are entitled to protection under the nation’s constitution. In a 67-page long ruling, Chief Justice Minallah had passed the verdict for Marghazar Zoo to be shut down, and its animals — whom he had referred to as “inmates” — to be relocated to sanctuaries.

“Kaavan was one of over 37 animals that had to be immediately evacuated from Islamabad Zoo and the High Court appointed me to lead the evacuation with the Four PAWS International team, starting from Karachi Zoo, to different sanctuaries. So we moved the animals to military bases, the Himalayan brown bears to Jordan, and Kaavan to Cambodia. It was a long-term moving of many animals such as wolves, monkeys, rabbits,” Dr. Khalil explained.

Kaavan was in a very good physical condition. His stereotypical behavior (traumatized) was nearly 85 percent over, which is a good sign. He has a wonderful jungle, a wonderful place where he deserves to live. A big forest with trees, water, bamboo trees, with good care, so he really is a lucky elephant. He also has two female Asian elephants in the enclosure beside his. He can see them and communicate with them, but he is still alone in his forest.

“I was really happy to see him after 18 months, it was great for me as a vet and for Four PAWS. It was so valuable to rescue an animal, which was impossible. For me, Kaavan, was a unique experience. It was the first time in my 30 years of experience that I bonded with an animal. To feel I made a friend, to feel I met a child although I hadn’t met him for a long time. To be honest, I cried. I was excited to see how Kavaan reacted and it warmed my heart. It was really a great gift for me and all the effort done by the team,” Dr. Khalil added.

Regarding Kaavan’s health and living condition, they are much better than they were in Pakistan, Dr. Khalil noted.

I think the nature and the jungle improved his (mental and physical) health conditions and the correct feeding system and he mainly eats normally from nature now. He has an incredible place, a huge space, incomparable with his enclosure in Islamabad. Also, he is not chained. His feet are changed, they are in a very good condition. He doesn’t have cracks in them or in his nails.

His stereotypical behavior has stopped. He has an incredible amount of sugarcane and a water bath where he can bathe and swim. His swimming and feeding conditions are much better. He selects the food he wants himself. There are a lot of natural trees and leaves and walk around all the day and rest in a wonderful and unique place in the jungle.  I get regular updates about him from a colleague working in the Cambodia Wildlife Sanctuary.

It was truly an emotional experience for Dr. Khalil who revealed that he had broken his rules to have a relationship with a wild animal for the first time in 30 years.

“Kaavan was the exception for me. This was a personal experience. I don’t know if it was good or bad, but I think Kaavan changed me. People think that Four PAWS and I rescued Kaavan but on the other hand, I think it was Kaavan who rescued me,” he revealed.

Kaavan was a gift from Sri Lanka to Pakistan in 1985. He had lived with his partner, Saheli, from 1990 onward but since her death in 2012, Kaavan became the last Asian elephant in captivity in Pakistan and the ‘loneliest elephant in the world’. He lived a life of trauma and abuse in Marghazar Zoo, and developed severe health conditions and killing tendencies.

To prepare Kaavan for his historic rescue and transfer to Cambodia in 2020, the FOUR PAWS team, led by Dr. Amir Khalil, carefully trained him for a safe and stress-free entry and exit into and from the transport crate after it ensuring that his health conditions had improved sufficiently.

Kaavan now lives a happy and safe life in Cambodia, as ensured by Dr. Khalil and Four PAWS International.

Born in 1964 in the Al-Fayoum oasis in Egypt, Dr. Amir Khalil is a war zone veterinary doctor who has over 30 years of exemplary and impressive experience in the field. He specializes in treating wild animals and evacuating them from conflict and war zones.

Known as the veterinarian who rescues animals from conflict zones, Dr. Khalil found his life calling as a child and graduated from the University of Cairo, after which he moved to Austria and joined Four PAWS International, a Vienna-based animal welfare charity, where he works as the Director of Project Development, and began his work in international activism, which involved immediate work in life-threatening conditions in foreign war zones – Kosovo in 1998 during its civil war, Baghdad in 1998 to save animals from Saddam Hussein’s private zoo, Tripoli in 2011, Gaza in 2014, 2015, and 2016, Syria in 2017, among many other places such as Darfur, Myanmar, and Kenya.

Dr. Khalil first made history in Pakistan during the 2010 floods, for caring for around 40,000 farm animals. After rescuing Kaavan in 2020, he returned to Karachi in August 2022 to treat four elephants, for which he received a Certificate of Appreciation from Karachi Zoo last month for his invaluable services.

He also told ProPakistani that he plans to visit Pakistan again to check up on the elephants in Karachi soon.