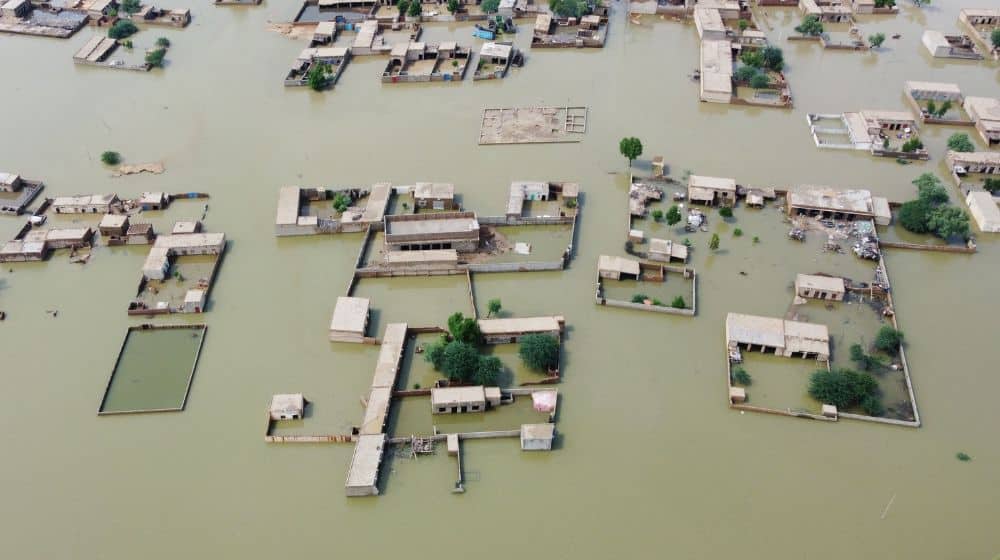 Federal Minister for Planning, Development and Special Initiatives Ahsan Iqbal on Monday said that the preliminary estimates suggest that total cost of damages, loss and needs caused by the devastating floods are about $46.4 billion.

He said preliminary estimates suggest that as direct consequences of flood the national poverty rate will increase by four percent approximately pushing between 8.4 to 9.1 million people in poverty.

“A conference of friends of Pakistan will be organized on 10th of next month to help build as climate resilient country”, said the minister while speaking at the inaugural plenary of 25th Sustainable Development Conference (SDC) organized by Sustainable Development Policy Institute (SDPI) and jointly held alongside UNESCAP’s 6th South and Southwest Asia High-level Political Forum and Policy Dialogue on SDGs.

The federal minister said that countries including Pakistan have been facing climatic risks which have necessitated climate adaptation and disaster risk management. Climate change is the biggest man made natural disaster which we are facing today, he added.

He said Pakistan is among top ten countries worldwide most affected by climate change. He said government played an instrumental role in historic decision at COP-27 to establish a fund for loss and damage caused by climate disasters. Iqbal said this dedicated fund will address losses and damages in developing countries which are vulnerable to adverse impacts of climate change.

The minister urged the IFIs to establish a special fund to provide interest free loans with grace period of up to 30 years for the developing countries to cope with the climate disasters.

The minister said that the countries of the region are facing the challenges of economic, social and climate change. The developing countries are facing pressure due to the war between Russia and Ukraine. The international financial institutions should provide long-term cheap loans to the developing countries, said the minister adding that economic recovery is a long-term agenda and there is a need to work on a common agenda for the development and prosperity of the people of the region. Rising food prices and facing a balance of payments crisis are confronted with and developing countries need to be given debt relief. He further said the government has earmarked a budget of Rs40 billion for the poorest districts and established a SDGs unit in the Ministry of Development and Planning.

He regretted that for the last six years they have not decided to hold the SAARC Summit. Instead of war, there is a need to fight poverty, unemployment and climate change, he added.

The minister called upon the regional countries to make joint efforts in achieving common goals of poverty alleviation, literacy, sustainable socio-economic development, and mitigation of climate disaster impacts.  The world is passing through unusual times, the innovative form of knowledge exchange, technology transfer, emergency response and recovery of livelihood and economies among the nations in the Global South particularly South and South-West-Asia is of immense importance than ever, remarked the minister, while addressing in the forum.

“We are among the first countries, who adopted SDGs as a national development agenda and established 7 specialized SDGs support units at the Planning and Development Departments at the federal and all provinces”, said the minister while highlighting the key initiates adopted by the Pakistan despite touch challenges.

Syed Zafar Ali Shah, Secretary for the Ministry of Planning, Development and Special Initiatives, said that recent flooding in Pakistan has incurred a loss of over $30 billion while the country needs at least $16 billion for the rehabilitation and reconstruction activities in the flood-hit areas.

Fathimath Niuma, the Deputy Minister for the Ministry of Planning, Housing, and Infrastructure, Maldives said that regional and sub-regional collaboration is vital to cope with the COVID pandemic and the SDGs agenda. She said that the current challenges have made us realize that global and national priorities should be realigned to be more resilient and sustainable.

Shehan Semasinghe, the Minister of State for Finance, Sri Lanka, said Sri Lanka focuses on achieving high-level productivity through a diversified economy. He reiterated that “the government is committed to ensuring that the progress on SDGs would not reverse due to challenges such as COVID-19”.

Dr Abid Qaiyum Suleri, Executive Director, SDPI said the objective of the forum is to foster and in-depth and shared understanding among the member states and stakeholders on strategies and opportunities at state, and sub-regional level to accelerate the implementation of 2030 agenda.

Mikiko Tanaka, Director and Head of UNESCAP Sub-regional Office for South and South-West Asia, Thailand said that regional countries are confronting with difficult times, therefore, they need to strengthen partnerships for regional development. She affirmed that UNESCAP will continue to support member countries in achieving SDGs or 2030 agenda.

Knut Ostby, the UNDP Country Director, said Pakistan has made significant progress in certain goals such as poverty eradication, access to energy, under nourishment, food insecurity, housing and climate change. “We don’t need building only concrete buildings, we need society to be resilient that is linked to SDGs,” he added.