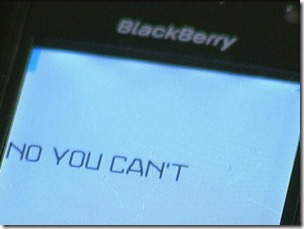 The greatest proof of the impact that technology has had on the overall fabric of life for the employed individual can be seen in the variance of working culture trends that is abound in the present society.

In the early 90s, the work-life balance was maintained by the limitation of information sharing and resource movement. No sense carrying a desktop that weighed more than the filing cabinet home every day.

Research In Motion (RIM), the Canadian company behind the infamous Blackberry (BB), brought the personal assistant around the turn of the century. The ideology was to build on the concept of a two-way pager, which later translated into a concentrated focus on email. That is why the QWERTY keypad became a synonymous feature of each BB device, excluding the Storm series.

For the corporate world, the promise of constant communication with key members of the workforce and information security through encryption was enough attraction to climb the bandwagon. Initially carried by the top henchmen of an organization, the blinking device has ended up on the bedside tables of the masses. Amazingly, it has also made zombies of the once normal folk, who would not have woken up to old-age alarms, but will immediately respond to a red blink or chirp of a new message.

Half-way into the recently consumed decade, RIM undertook a revamped approach to marketing its product. It already had the lion’s share of the Smartphone market, but most of it was entrenched by large corporations and multinationals that wanted to rope in their employees with an always-on work mode.

The new marketing gimmick was to make the devices cooler to appeal to the upcoming younger crowd, and this involved re-designing features of the device, e.g. the track-pad. Add to that the convenience of a messenger application (BBM for the members of the Berry Brigade) that allows free communication with fellow BB users around the globe, and RIM had managed to begin the pull of another market segment in droves.

BB services entered Pakistan in 2005 thanks to Mobilink. Over the years, its uptake has followed a trend similar to global ones, with corporates leading the way. In fact, the period of computerization of processes has made Smartphones a key component of the requirements for every day work. Most large corporations and multinationals have the accepted process of issuing a device to that new worker on the first day, ensuring that the skill they have acquired is not wasted at any time of the day.

Even on the individual front, the BB fad has grown exponentially. One could attribute it to the global village footprint which now encompasses the urban centers of Pakistan, especially among the large number of young professionals who have returned after spending some time in the West. For them, the internet and cellular connection features among the most basic necessities of life.

However, since May last year, the services which are standard for BB users across the globe have become sub-standard for the many in Pakistan. The restriction which was enforced to block blasphemous content now appears to concentrate largely on the Berry Brigade.

After all, the Pakistani mind is so fragile that it is essential for the PTA to censor or control so that we may not hurt ourselves by going to the wrong places.

In addition to the above, there is also the push by the government to have more visibility of the information moving on the RIM secure expressway; something that is resonant of requests made by other Middle Eastern nations.

The strange factor is that the PTA restriction was lifted several months ago, but BB services still remain a drag. For all those prepared to pounce, this refers to Blackberry Internet Services (BIS) and not Blackberry Enterprise Services (BES). The latter works off a server at the organization’s premises, connected with a domain/email server.

Berry Brigade continues to blame operators and the PTA for giving us a half-empty pitcher while charging for the full. However, insiders report a different reasoning that involves RIM and its request to have complete indemnity from all BB issues, as the Pakistani cellular operators have deployed local kill switches and filters to enforce any future PTA directives.

For RIM, any such deployment is a hindrance to its information model, which is created around sanctity of data between the sender and receiver and a freedom of use.

While this battle continues, other device manufacturers are preparing to counter the Berry-mania with their own solutions. Samsung and Dell have announced enterprise software that would work on the exact same dynamics as RIMs, with smartphone devices to rival BBs. Microsoft, with the launch of Windows Phone 7, has built the foundation to take steps towards similar pastures, and as Microsoft Exchange dominates most organization’s computer architecture, analysts are hoping for brighter things from the software giant.

Members of the Berry Brigade continue to grow and BBM to their fellow berries across the world, with the hope that someday soon, they will wake up to find the cellular providers giving them their full pitcher of berry services. And maybe even access to the App World. Till then, the brigade continues to hold blink vigils in all corners of the society.

Have a gaze around the next gathering you attend; that red or green blink is our protest to be given fair treatment.