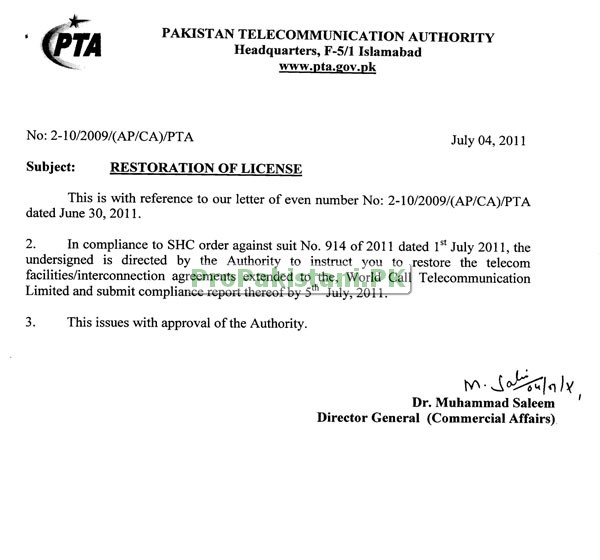 The Pakistan Telecommunication Authority (PTA) issued orders today to revert the license suspension notices of 3 LDI Operators issued by the authority on 30 June 2011, citing the Sindh High court stay orders granted to Redtone, Worldcall and Multinet, said a statement sent to us by LDI consortium.

Statement said that PTA, in it’s today notice, directed all  of the aggrieved operators be restored immediately.

Check below one of such letter sent by PTA to restore World Call’s License:

The press statement further focuses on the issue of grey traffic and the role of PTA. It says, real question for the PTA is, what it is doing to stop the menace of illegal gateway exchanges which are causing losses estimated to be Rs. 40 Billion (and growing) to the national exchequer?

Statement indicates that instead of addressing the danger of illegal gateway exchanges, PTA has recently taken an aggressive stance against the licensed LDI industry who individually filed challenges in the courts of Sindh and Punjab against certain fixed levy elements in the regulations.

Normally, the rates licensed LDI operators charge per international incoming minute contains provision for the fixed levy as determined by the regulator; however, the PTA’s failure to put a stop to illegal gateway exchanges results in undercutting any ‘official’ rate, stealing traffic from licensed operators.