Pakistan Telecommunications Company Limited (PTCL) has posted a net profit after tax of Rs. 2.84 billion in its half-year earnings made during FY2011-12 for the period ending December 31, that’s 29 percent lower than Rs 4.02 billion earned in the same period in 2010.

However, PTCL’s net revenue rose to Rs. 28.1 billion, showing a growth of 7% over the same period during previous financial year.

PTCL’s group revenue stood at Rs.55 billion during the period under review, showing a growth of 6% over FY2010.

Business Recorder, citing a KSE notice said that during 1HFY12, PTCLs cost of services grew by more than eight percent, while company’s administrative expenses grew by 12.14 percent, whereas the selling and marketing expenses came down by nearly 2 percent in 1HFY12.

“PTCL’s profits and revenue growth during first half of FY2011-12 is a strong indicator of our dynamic corporate direction as well as our customers’ continued satisfaction and trust,” said PTCL CEO & President, Walid Irshaid, following a meeting of the company’s Board of Directors held here today, which announced the Company’s six-months financial results for the period ending December 31, 2011. “Through optimal use of resource, we want to achieve enhanced revenue, greater levels of customer satisfaction, as well as improve our shareholders’ value.”

A statement issued by company said that despite the economic challenges faced by Pakistan, PTCL remained strong throughout 2011 in emerging segments of Broadband in Wire-line as well as Wireless, and other corporate services.

“We are constantly innovating and improving our customer experience,” said Mr. Irshaid, while recounting the successes of PTCL’s most recent business offerings. “We strongly believe that PTCL will remain the market leader and a service provider of choice throughout Pakistan for providing cutting-edge integrated telecom solutions to our customers.” 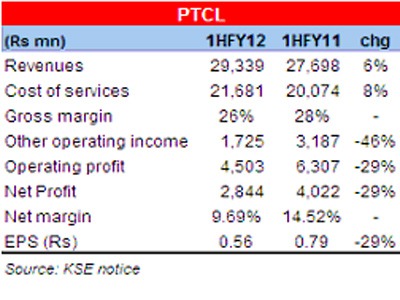