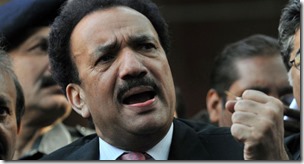 Cellular services are to remain suspended tomorrow in Karachi and Quetta from 10 AM to 6 PM, a highly reliable source with direct information of the matter has confirmed ProPakistani.

A source, who wanted to remain unnamed, confirmed ProPakistani that PTA has issued the directive for suspension of cellular services.

Earlier, while briefing the media, Mr. Rehman Malik said that these measures are being taken due to security reasons, which the government is increasing on the first day of Muharram.

Mr. Malik said that suspension of cellular services in Karachi and Quetta for tomorrow, along with other measures (such as ban on motorbikes), are based on credible intelligence information that hints the terrorist attacks in the cities.

Cellular industry is fearing large-scale cellular suspension during first ten days of Muharram. However, no mobile operator is speaking up against such decisions to avoid possible wrath of the government.

It merits mentioning here that government banned MNP yesterday, in addition to a directive according to which SIMs won’t be sold at retailers’ shops from December 1st, 2012.