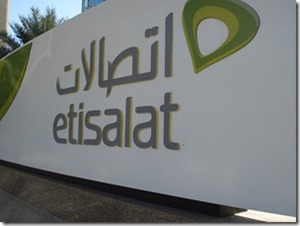 Etisalat has turned down Government of Pakistan’s offer for settling payment dispute by valuing outstanding proprieties and deducting the amount from USD 800 million that the UAE based group has held against the buyout of 26 percent shares of PTCL in 2005, reported Business Recorder.

During his recent meeting with Chairman Etisalat, Prime Minister of Pakistan had shown serious concerns over outstanding payment that Etisalat is refusing to settle till now.

Etisalat has a firm stand of not clearing the pending payment unless it gets control of 3248 properties as agreed in SPA (Sale Purchase Agreement), 3117 out of which have been transferred to Etisalat till date, leaving 131 outstanding properties – 32 public and 99 private.

20 out of 99 remaining property holders (mainly in Sindh) have moved to court to get hold of their premises, which is why Government of Pakistan is facing hurdles in transfer of remaining prosperities.

Etisalat said that value of remaining properties (which are less than 1 percent of total agreed properties) is too high and they should be handed over instead of devaluation from USD 800 million.

Etisalat is holding USD 800 million for over 4 years now, while Government of Pakistan has tried several times to settle the dispute by one way or the other. However, no proper resolution has been met so far.

Privatization commission of Pakistan gave several deadlines to Etisalat and the media for the resolution of payment dispute, but nothing has matured and Pakistan is still waiting for the price of 26 percent shares of PTCL that it sold seven years ago.

Pakistan has once said that it could take back the control of PTCL if pending payment isn’t cleared, however, that turned out to be a just a statement.

In a related news, Government of Pakistan had said that it will not allow any defaulting firm to participate in upcoming 3G auction, which – if implemented – can impact Etisalat as the group has shown its intents for participation in 3G auction.