Despite new Android phones joining the frag in early 2018, Apple’s best in class iPhone X managed to outsell all of them by a huge margin.

Despite not being as popular as some of the other new phones like the Samsung Galaxy S9, the almost half a year old iPhone X has managed to outsell the new flagship in Q1 2018.

According to a report by the research firm Strategy Analytics, the iPhone X remains the best-selling phone this year, followed by its brethren, the iPhone 8 and 8 Plus, in tow. The Apple flagship achieved the milestone after recording sales of 16 million units in Q1, or 4.6% of the total share of the market. The regular iPhone 8 and 8 Plus lagged it with sales of 12.5 and 8.3 million units, respectively. 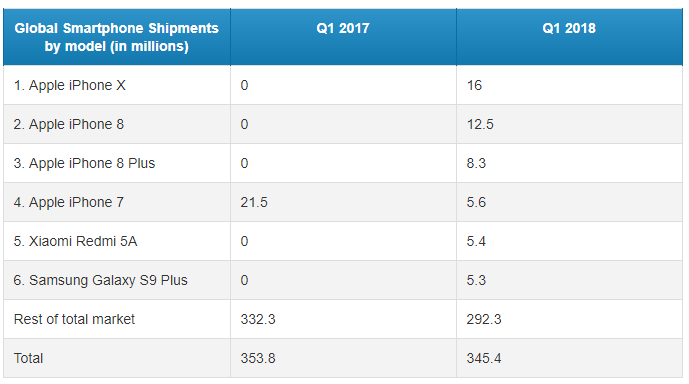 The Galaxy S9 Plus is the only other phone worth mentioning here, which just shows the grasp of Apple in the segment which really matters. The next phone was the new budget Redmi 5A phone from Xiaomi, which is among the best budget phones one can buy, with sales of 5.4 million.

The only Samsung phone in the list, the Galaxy S9 Plus, was behind the Xiaomi phone with sales of 5.3 million in the quarter.

The rest of the market had sales of 292.3 million units in the quarter, or 84.6% of the total, though, it is a significant drop from the 93.9% captured by this segment in the same quarter last year.

This potentially points towards an increasing Average Selling Price (ASP) of a smartphone, thanks to continued high-end releases from makers such as Apple, Samsung, Huawei, and Google.

Overall, the market dropped slightly by 2.4%, though, last year it grew by 6.2% during the same time period (Q1). The fall is invariably due to the slowdown in the Chinese market, which has seen its largest drop in sales since 2013.