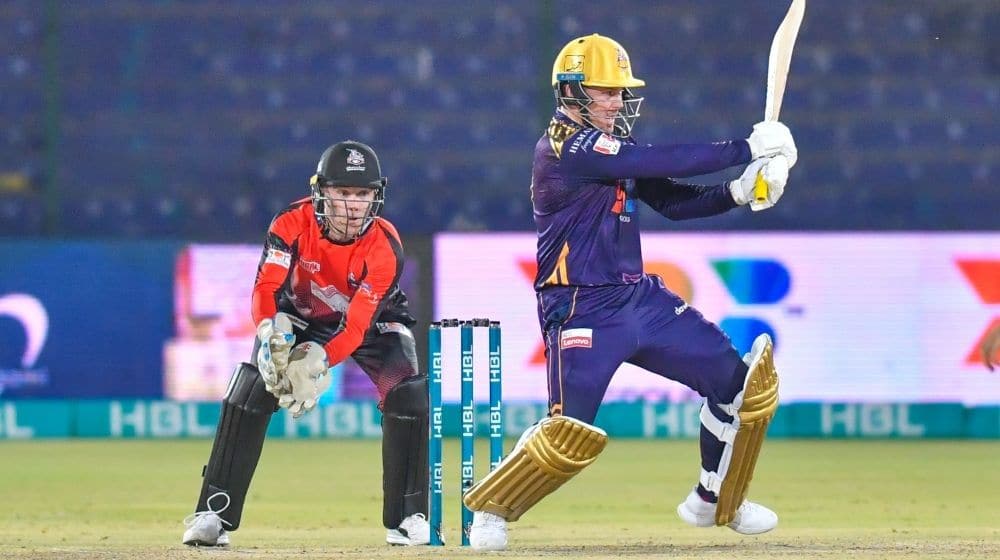 Quetta Gladiators registered their second victory in the competition as they chased down a target of 205 against Lahore Qalandars. Quetta have now moved to the fourth spot in the PSL points table as they overtook Peshawar Zalmi while Lahore stay at the third spot after suffering their second loss in the tournament.

Lahore started their innings brilliantly as Fakhar Zaman and Abdullah Shafique continued their fine opening partnership. Fakhar was exceptional once again as he scored yet another half-century in the competition. Late fireworks by Harry Brook and David Wiese at the backend of the innings took them to a mammoth total of 204/5.

Quetta’s platinum English opener Jason Roy took the game in his hands and struck the Lahore bowling unit all over National Stadium Karachi. Roy scored a magnificent century in his first game of the tournament this season as he set the perfect platform for Quetta to chase down the daunting target. James Vince and Mohammad Nawaz did the rest of the work as they took Quetta home with 7 wickets in hand.

Jason Roy was named as player of the match for his ‘Royal’ innings of 116 off 57 balls. His innings included 11 fours and 8 sixes.

Quetta Gladiators will face Lahore Qalandars in the 15th match of the PSL 2022 on Monday, 7 February. The match, scheduled at Karachi’s National Stadium, will start at 7:30 pm PKT.

Quetta Gladiators are set to take on an in-form Lahore Qalandars in the last match of the Karachi-leg in PSL 7. Quetta will be determined to quickly turn around their form and leapfrog Peshawar Zalmi to the fourth spot in the PSL points table while Lahore will be looking to continue their excellent form and reclaim their second spot on the table from Islamabad United.

Quetta have been inconsistent in their performances this season. They were exceptional in their solitary win against Karachi Kings and fought until the end against Peshawar and Multan. However, they were completely outplayed by Islamabad United in their previous outing. Quetta will get a much-needed lift in this match as their star platinum signing Jason Roy is available for selection. With Jason Roy, James Vince, and Iftikhar Ahmed, they have a solid batting unit that can tackle the exceptional pace bowling of Lahore Qalandars.

On the other hand, Lahore have been top-class in the tournament so far. They snatched victory from the jaws of defeat in their previous match against Islamabad United and they will be determined to get their fourth win in the competition and solidify their position in the top 2. They have a well-balanced squad with a world-class bowling unit and look like a team that will go deep in the tournament.

Quetta are expected to make one change in their line-up with Jason Roy making his way into the team at the expense of fellow English player, Ben Duckett. Lahore are expected to name an unchanged XI.

Overall, the two sides have come face to face 12 times in the tournament. Each team has won 6 matches each against each other. They last faced each other on 15 June 2021 at Abu Dhabi which Quetta won by 18 runs.

Jason Roy’s inclusion will give Quetta a massive boost. Roy is one of the finest openers in limited-overs cricket and has the ability to nullify the exceptional bowling attack of Lahore Qalandars. Roy will be crucial for Quetta as they head to the Lahore leg of the tournament and Quetta will be hopeful that Roy will quickly turn around their fortunes.

Haris Rauf has not been at his absolute best in the competition so far. His form has not been a point of concern for Lahore so far as they have other bowlers firing on all cylinders. Haris himself though will be disappointed by his performances and will be determined to prove his critics wrong by helping Lahore win their fourth match in the competition.