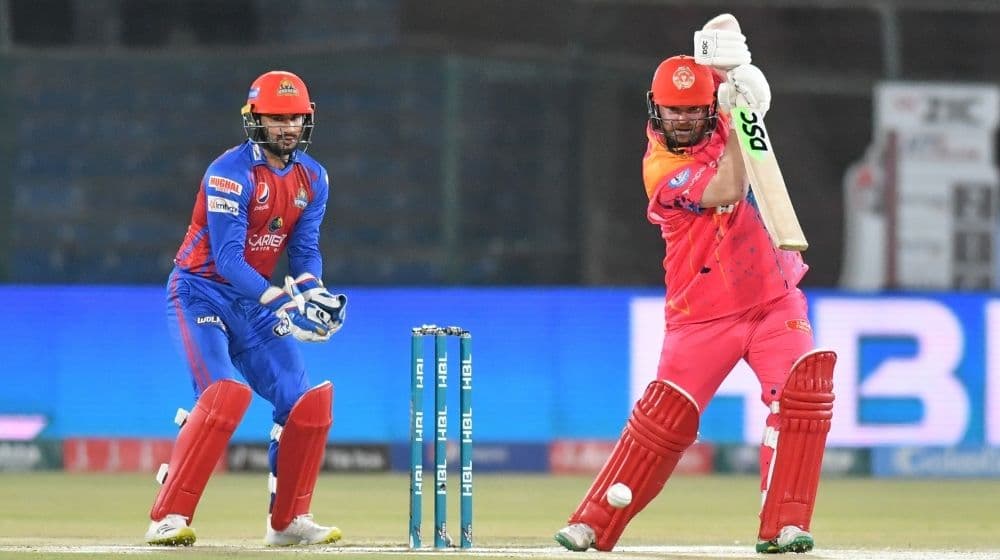 Islamabad United registered their third victory of the campaign as they defeated Karachi Kings. Islamabad moved up to the second spot on the PSL points table due to their superior run rate while Karachi Kings stay at the foot of the table after their fifth consecutive loss.

Islamabad United were not at their usual best as the openers struggled for runs on a slow pitch at the National Stadium Karachi. Paul Stirling and Alex Hales were subdued not due to the lack of intent but some clever bowling by Karachi pacers. Captain Shadab Khan stepped in and increased the scoring rate with some clean hitting before Azam Khan’s quickfire cameo took the total to 177/6.

Karachi got off to the worst possible start as they lost Sharjeel Khan and Babar Azam cheaply. The rest of the batting line-up struggled as well as Shadab Khan ran riot, picking up 4 wickets to restrict the Karachi batting unit. They ultimately bundled out for 110 as they lost the match by 42 runs.

Shadab Khan was named as a player of the match for his magnificent all-round performance. He scored 34 runs off 19 balls and finished with figures of 4/15 in his four overs.

Karachi Kings will face Islamabad United in the 14th match of the PSL 2022 on Sunday, 6 February. The match, scheduled at Karachi’s National Stadium, will start at 7:30 pm PKT.

Karachi Kings will be determined to win their first match and get on the road to recovery as they face Islamabad United at National Stadium Karachi. Karachi are still winless in their first four games in the competition and are staring at elimination early on in the tournament while Islamabad will be looking to make a comeback after their disappointing loss to Lahore in their previous outing.

Karachi Kings have been really poor throughout the tournament. Their performances in all three departments of the game have let them down and the team management will be looking at the senior players in the squad to step up their game at such a crucial point in the tournament. Their bowling department is going to get a much-needed lift as England’s Chris Jordan is available for selection while Usman Shinwari is also expected to be named among the eleven players in the line-up. It is a must-win game for the Kings.

Islamabad on the other hand have been hot and cold throughout the tournament. They have won two and lost two in their first four matches and their inconsistency is worrisome for the United management. They will be highly disappointed with their narrow loss to Qalandars in the last match and will be looking to rectify their mistakes to bounce back quickly in the tournament. A win for Islamabad can take them to the second spot in the PSL points table once again.

While Islamabad are likely to name the same XI, Karachi are expected to make a few changes in their line-up. Chris Jordan and Usman Shinwari are likely to replace Aamer Yamin and Mohammad Imran Jr.

Overall, the two sides have come face to face 16 times in the tournament. United have an upper hand as they have won 10 while Kings have won 6. They last faced each other on 14 June 2021  at Abu Dhabi which Islamabad won by 8 wickets.

Sharjeel Khan needs to fire for Karachi as they are heavily reliant on him in the batting department. Sharjeel has a good record against Islamabad as well and he will be looking to get back to his best in this all-important clash. Karachi will be hoping that Sharjeel can find his form quickly or else they might struggle in the rest of the tournament as well.

Islamabad will be hoping that their bowling department can improve ahead of the all-important fixtures. United’s leading fast bowler, Hasan Ali has been struggling for form and they will need him at his best to win crucial encounters. Hasan Ali has been out of sorts in the shortest format of the game recently and he will be determined to prove his worth in this match.