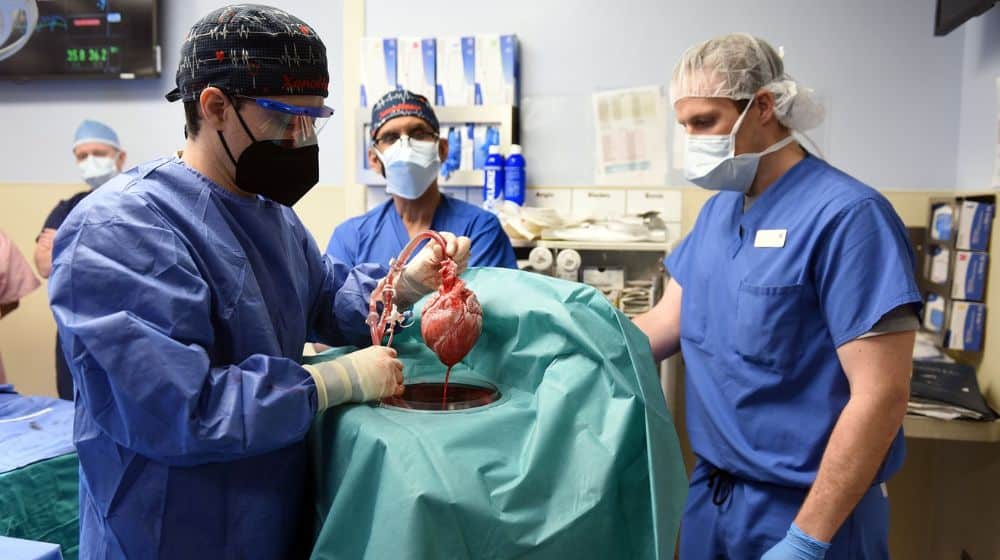 Dr. Mansoor Mohiuddin, who graduated in medicine from Karachi, revealed that persistence was crucial in performing the first-ever successful xenotransplant.

Dr. Mohiuddin achieved a milestone in medical history at the start of this year when he successfully performed the groundbreaking procedure of transplanting a pig heart into a person in January.

He was the keynote speaker at a ceremony hosted by the Dow Institute of Health Professional Education (DIHPE) at Karachi’s Moin Auditorium, as the president of the Dow Graduates of North America (DOGANA) and a medical graduate from Karachi’s Dow University.

He expressed that the achievement came after several previous efforts that were discouraged by a vast majority of people. Yet, in the end, perseverance paid off, and he was finally able to discover a new approach to saving lives.

He further asserted that research and self-pity are inextricably intertwined, and that research cannot be carried out without overcoming one’s own dissatisfaction and continual pressure.

About the obstacles and problems he encountered, he stated that as quickly as he began his first research study, it was terminated. As a result, five research initiatives at various colleges were discontinued owing to a shortage of finances, but he refused to give up and maintained his efforts.

Discussing the lack of a collaborative database on illness incidence and treatment in Pakistan, he emphasized that there is an immediate need for an online database relating to illnesses in Pakistan and that he is confident that Dow University would achieve this since research cannot be conducted without data.

He stated that DOGANA is eager to pursue collaborative research projects with Dow and will completely collaborate in research.