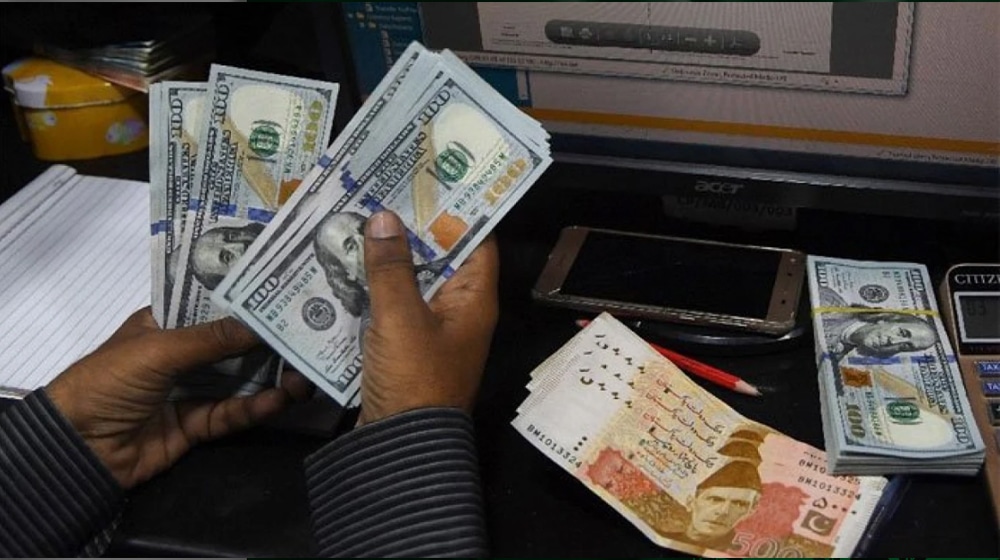 Inward workers’ remittances in Pakistan, which is an important source of forex reserves for the country, have been on a declining trend in recent months.

According to a report by Topline Securities, the rise in the forex (FX) spread between interbank and open market/black market rates has impacted Pakistan’s remittances.

The report notes that our FX currency spreads will depend on PKR devaluation, the realization of foreign flows from friendly countries and financial institutions, and the revival of the International Monetary Fund (IMF) program.

Painting a rough picture, remittances in Pakistan declined to US$ 2.0 billion in December 2022, down 19 percent year-on-year (YoY).

The report notes that since the appointment of new Finance Minister Ishaq Dar on September 28, 2022, who has been very vocal that the Pakistani Rupee is undervalued, not only the spread between the interbank and open market rate has increased but it has also given birth to a new rate in the black market due to short supply of dollars. Post Dar appointment, remittances are now down 16 percent YoY in October-December 2022 to US$ 6.4 billion.

In FY22, workers’ remittances stood at US$ 31 billion which is 8 percent of GDP one of the highest in the region. 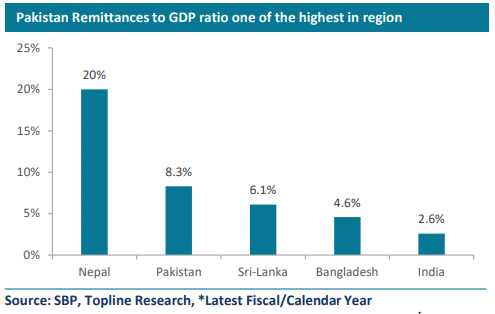 Remittances along with exports of US$ 32 billion in FY22 remained a major source of FX flows for Pakistan hence this fall in remittances is a key concern. 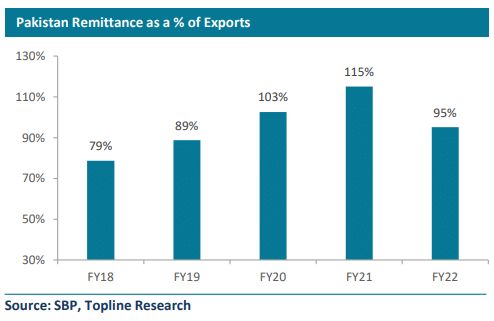 The decline in remittances is mainly due to the rising spread between the US$ interbank rate and open market/black market rates seen in recent months. One of the main reasons for the US$ shortage is that now exchange companies are required to surrender 100 percent of inward remittances in the interbank market as per the latest SBP regulation.

The interbank rate is the official rate banks use for trading with other banks and for imports and exports. This is currently hovering around Rs. 228 against US$ and went as low as Rs. 240 before Ishaq Dar announced an inquiry against Banks on currency speculation and initiated administrative measures to control the official currency rate.

Currency in the open market with local exchange companies is available only on the presentation of travel documents and is subject to buying limits. Due to restrictions on exchange companies black market is growing where no documentation is required. US$ is currently available at Rs. 260-265 in the black market which is at a 15-20 percent premium to the interbank rate.

Sri Lanka in recent history also witnessed a sharp fall in workers’ remittances amid a rise in the spread between interbank and open market/black market rates. In 2022, the economic situation started to worsen further as Sri Lanka defaulted for the first time in its history when it failed to make external debt interest payments in May 2022. 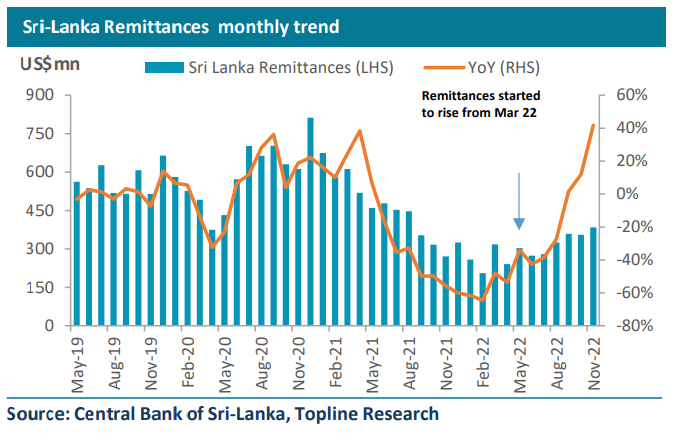 However, since March 2022, given the precarious situation, it started devaluing currency which led to a gradual reduction in open market currency premium. Sri-Lankan currency against USD devalued by ~50 percent in 2022 in the interbank market.

The trend is also visible in the case of Bangladesh where remittances started declining in June 2021 as they fell from US$ 2.2 billion in May 2021 to a low of US$ 1.49 billion in February 2022. Bangladesh did not devalue its currency during this period as its Takka traded at around 84-85 against the US Dollar despite signs of weakening FX reserves. 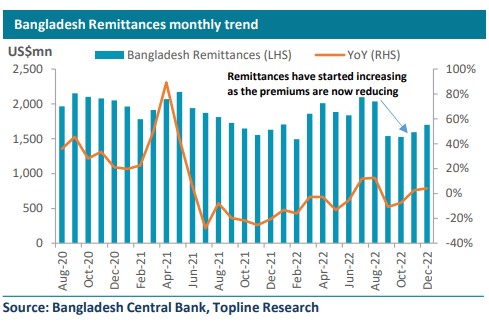 IMF recently agreed to a US$ 4.5 billion support program for Bangladesh. This includes US$ 3.2 billion Extended Facility and US$ 1.3 billion under the Resilience and Sustainability Facility. The purpose of the program is to bring in macro stability as the country has been severely affected by falling reserves and rising inflation.

For Pakistan historically, workers’ remittances got impacted when the spread between the interbank and open/black market rates widened. To recall, in May 1998 when Pakistan conducted nuclear tests, Pakistan faced international sanctions which led to a disturbance in international assistance. 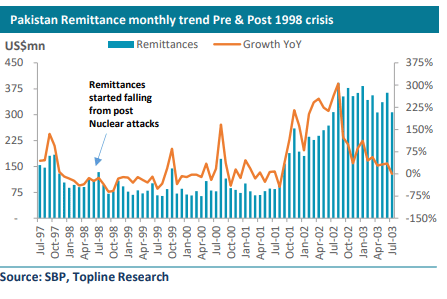 Consequently, Pakistan witnessed a rise in currency spread between interbank and open market/black market, after which Pakistan entered into an IMF program in November 2020 and also received strong foreign flows after the 9/11 incident. Remittances in the country increased by 120 percent to US$ 2.4 billion in FY02 with increased US$ inflows and a falling spread.

The report quoted an earlier estimate of a 10 percent fall in workers’ remittances in FY23 to US$ 28 billion. This could fall further from its estimates if this high spread situation continues. Overall, Pakistan’s FX currency spreads will be dependent upon the devaluation of PKR, the realization of foreign flows from friendly countries and financial institutions, and the revival of the IMF program.