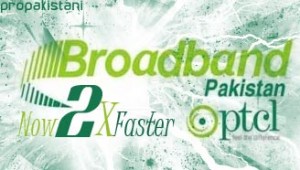 It seems like PTCL is going to double the DSL speeds of broadband customers very soon, most likely with in month or two, at most – same like it did last year. According to news the existing packages will be doubled as

According to PTCL representative and feedback of different users PTCL is testing these double speeds on randomly selected subscribers from different areas of country. These users will be downgraded after the testing period ends to their original speeds and will be upgraded after official announcement, which is most likely to be on 23rd march, but can be delayed as no final date has been announced yet.

We hope that student package users will also get this upgrade and can enjoy higher speeds at discounted rates as recently PTCL discontinued all student packages above 1mbps.

We will keep you informed on this, you can also share your experience in comments if you got this test up gradation.

No official words on the situation yet.

Update: We are told that feasibility tests for DSL speed up-gradation has failed, and PTCL will not upgrade DSL speeds, as of now. Apparently, due to infrastructure constraints and quality of copper is not allowing PTCL to offer double speed. So no further speed ups till further decision.